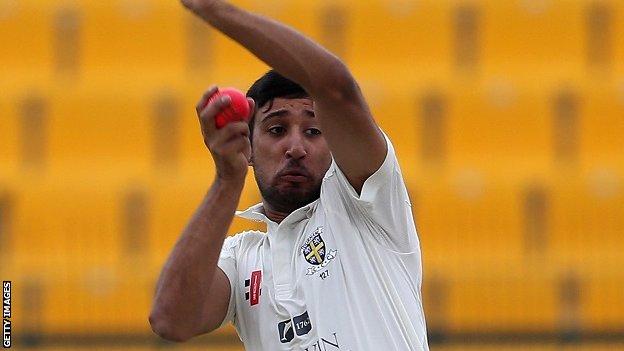 Head coach Jon Lewis believes Durham can take a lot of positives from the pre-season match against the MCC, despite a six-wicket defeat.

"Coughlin impressed and Usman seems to have found half a yard of pace.

"To see the young guys looking like they have taken their games forward is very encouraging," he said.

There's a few to come back in, but with Ben Stokes there's a broken bone to heal. He'll just have to be patient and so will we

Coughlin did not take a wicket, but showed good control in the 18 overs he bowled, conceding less than two runs per over.

Bradford-born all-rounder Arshad took 1-26 from 10 overs in MCC's first innings, having contributed 16 wickets in five Championship matches towards the end of last season to help Durham win their third title in six years.

Lewis continued: "I look at the seven days as a whole, and we used the time well. To lose the game wasn't ideal, but four out of the top six batsmen have had some good time at the crease, which is a start, and will hopefully get some more time in the forthcoming friendly at Kent.

"Chris Rushworth, Coughlin and Arshad got into their work well, and Scott Borthwick got 45 overs under his belt, which is pretty unusual for a leg-spinner at this time of year.

"I don't think his figures reflected how well he bowled."

Lewis said he was confident international seamer Graham Onions will be fit and ready when the champions play their first match in anger, against newly-promoted Northants starting on 13 April.

Captain Paul Collingwood will also have returned from England T20 coaching duties by then, but Lewis could not put a timescale on all-rounder Ben Stokes' recovery from breaking a bone in his hand by punching a changing-room locker.

"There's a few to come back in, but with Stokesy, there's a broken bone to heal. He'll just have to be patient and so will we," Lewis added.