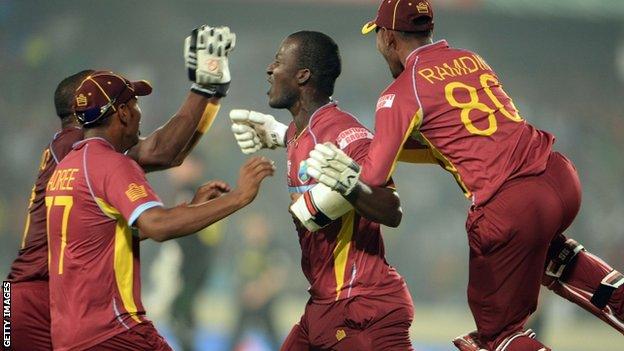 Captain Darren Sammy hit consecutive sixes to lead West Indies to a Group Two victory with two balls to spare and leave Australia on the brink of going out of the World Twenty20.

Sammy crashed James Faulkner over the ropes to finish unbeaten on 34 off 13 balls after a thrilling game in Dhaka.

"I did not call that. I must confess I was backing Australia but what an amazing performance by the West Indies captain.

"West Indies staying in the tournament is really important - they are great characters and provide a firework display second to none."

Australia had posted a competitive 178-8, with Glenn Maxwell scoring 45 off 22 balls and Brad Hodge making 35.

But Chris Gayle (53) kick-started the chase and Sammy finished it in style.

Faulkner had spiced up the build-up to the game by telling the press that he did not "particularly like" the West Indies following a run-in with Gayle last year and that he was looking forward to knocking them out of the competition.

And so, after heaving the young fast bowler back over his head to complete Windies' best ever T20 chase, Sammy sprinted off towards his jubilant team-mates, while Gayle danced in delight.

"We used it as motivation. It was so funny that Faulkner was bowling the last over; the victory felt very good. That put the cherry on top.

"When you're in the ring, you're on the ropes and you throw that knockout punch, that's how it felt."

Australia skipper George Bailey added: "I don't mind what he [Faulkner] said. I think probably he might choose his words a little bit differently next time. I'd be disappointed if teams weren't thrilled to beat us."

Holders Windies will join India in the semi-finals if they defeat Pakistan in their final group game on Tuesday.

After back-to-back group defeats, Australia will need to win their final two matches against India and Bangladesh and rely on other results going their way to stand any chance of going through.

"Any loss is always hard to take," said Bailey. "I don't think we batted very well. We've played two games of cricket where we haven't been our best."

Australia, beaten by Pakistan in their first match, once again struggled against spin as a wicket apiece for Samuel Badree, Sunil Narine and Marlon Samuels reduced them to 41-3.

Maxwell led a counter-attack with a bullish innings, including three sixes and five fours, before he pulled Badree to Dwayne Bravo at deep midwicket.

Hodge kept up the momentum with an entertaining 35 and Brad Haddin cracked the last ball of the innings for four to post what looked to be a solid score.

Gayle then signalled his intent with four consecutive boundaries off Mitchell Starc in the second over of the West Indies innings.

He and Dwayne Smith pummelled 50 runs in less than five overs before Starc found the edge of Smith's bat to give Australia the breakthrough.

Gayle ploughed on, however, bringing up his fifty in 31 balls and taking his team to the 100 mark in the 12th over.

But the innings wobbled after Gayle holed out to young leg-spinner James Muirhead and was followed to the pavilion by Lendl Simmons (26) and Marlon Samuels (12).

Bravo wrested back the initiative with 27 off 12 balls, but with 31 required off the final two overs, Australia were slight favourites.

Sammy saw things differently, however, lashing 19 runs off the penultimate over from Starc and keeping the strike to finish the match with two mighty blows.