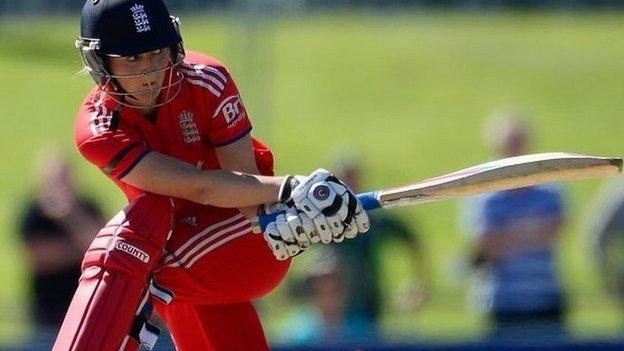 England sealed a comprehensive 79-run victory over Bangladesh to move closer to a semi-final place at the Women's World Twenty20 in Sylhet.

West Indies beat Sri Lanka in the day's other game to stay in top spot in Group B, with England in outright second.

England, who lost their first group match to West Indies but then overcame India, face Sri Lanka in their final group match on Sunday.

"We're really pleased, considering the start we had," said Edwards, whose side began slowly with the bat after winning the toss. "To post the total we did was a great sign.

"To then bowl well means it was about as perfect as our performance could be. Things are coming along nicely. It's about peaking at the right time in these tournaments."

Edwards, who named an unchanged team, held the innings together after England slipped to 49-3 in the 11th over.

The captain brought up her half-century from 55 balls and, after being dropped, took her score to 80 before being stumped at the end of the 19th over.

Heather Knight weighed in with an aggressive 18 not out as England set Bangladesh a testing target.

Bangladesh were never in contention after losing four wickets in the first eight overs, with Hazell claiming three of them in a superb spell.

Edwards left the field for treatment after the ball hit her in the face while fielding but she returned later and, despite dropping her second catch, saw her side complete a commanding win.