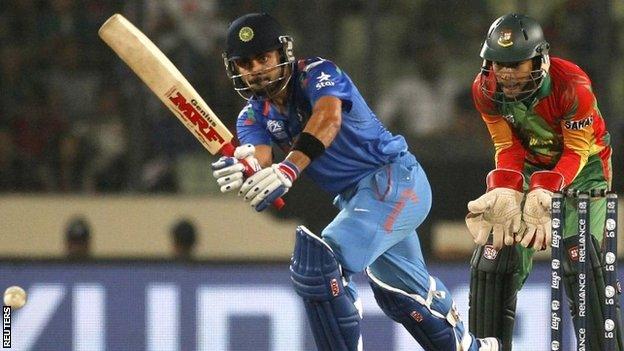 India cruised to a comfortable eight-wicket victory over Bangladesh in Dhaka to seal their place in the semi-finals of the World Twenty20.

Virat Kohli (57) and Rohit Sharma (56) shared a second-wicket partnership of 100 to ensure a third successive Group Two win with nine balls to spare.

"India have played some really good cricket. Bangladesh put up a reasonable fight but India really are an amazing team."

Bangladesh had been restricted to 138-7 in their 20 overs, leg-spinner Amit Mishra (3-26) again impressing.

Anamul Haque (44) and Mahmudullah (33) offered the only real resistance.

It was the Tigers' second successive defeat in the Super 10 phase, following their opening loss to West Indies, and leaves the tournament hosts facing imminent elimination.

"The batsmen that get set end up throwing away their wickets, so big partnerships are just not happening," said Bangladesh skipper Mushfiqur Rahim. "We thought 150-plus would be a good total, but unfortunately we ended up below that."

Rahim's men struggled to compete against a powerful India side who coasted to their target - victory achieved when skipper MS Dhoni, who promoted himself up the batting order, hit a six straight down the ground to finish on 22 not out from 12 balls.

"There were no celebrations at all because the next few games are going to be extremely tough," said Dhoni. "I had not batted for a while, so I asked Yuvi (Yuvraj Singh) if I could go in ahead of him."

Dhoni will be thankful for his short time at the crease, with established batsmen like Yuvraj, Suresh Raina and Ravindra Jadeja all left in reserve - a sign of India's strength in depth.

However, as they showed in their previous victories over Pakistan and West Indies, their bowling is equally as powerful on the turning wickets of Bangladesh and the hosts became the third team to be restricted to less than 140 by the Indian bowlers.

Mishra was once again a key weapon, taking another three wickets to take his combined figures in the tournament to 7-66.

He took the big wicket of fluent opener Anamul, who was bowled by a googly, and also accounted for Nasir Hossain and Ziaur Rahman while keeping run-scoring opportunities to a minimum.

His fellow spinner Ravichandran Ashwin also impressed with 2-15 as he had dangerous strokemaker Tamim Iqbal caught behind and dismissed number three Shamsur Rahman with his next ball.

Only some powerful late hitting from Mahmudullah, who struck five fours and a six, got Bangladesh to a respectable total - but it was not enough to trouble the classy Indians.

Shikhar Dhawan's poor run of form continued when he dragged on to Al-Amin Hossain for just one, but Rohit and Kohli assumed control as they exploited the gaps in the field with aplomb while also scoring regular boundaries to keep the run-rate down to manageable levels.

It was left to Dhoni to finish the job with a four and two sixes as India, who won the inaugural tournament in 2007, reaffirmed their status as strong favourites for the title.