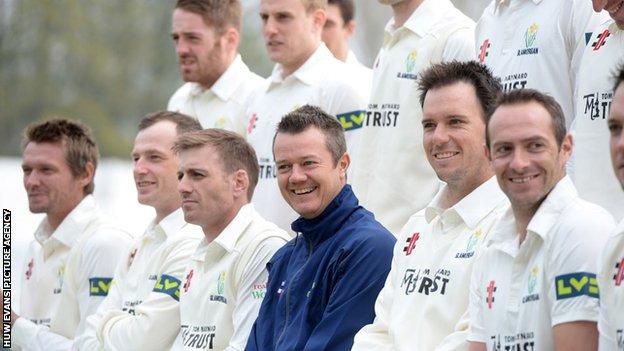 Northants won the Twenty20 title and gained promotion to Division One of the County Championship in 2013.

Glamorgan reached the final of the 40-over tournament but finished second from bottom in the four-day league - and Radford wants that to change.

"The priority I think for us is to try and get promotion into the first division," Radford said.

Radford took over as head coach in October 2013, following the departure of Matthew Mott.

His appointment was one of the first actions taken by new director of cricket and chief executive Hugh Morris.

The pair are targeting success in one-day and four-day cricket, with the example set by Northants in balancing the requirements of both forms of the game the standard they are aiming to follow.

"A key thing for me is looking at a team like Northamptonshire last year," added Radford.

"They won the Twenty20 and they got promotion.

"Balancing the squad can be done and that's what I want to try and achieve this year is to get the promotion, and in the one-day game try and win a trophy as well."

Former South Africa batsman Jacques Rudolph will miss the opening two games, but is due to be with the squad by the time they face Gloucestershire in Cardiff on 20 April.

Radford believes Rudolph will address one of the key problems that dogged the Welsh county in 2013.

"We've got to really cement at the top of the order and get through the new ball, and I'm hoping that when Jacques Rudolph arrives that's what he'll do for us," added Radford.

"He's a former international player with lots of experience and he can help us against the new ball."

"Glamorgan in a sense represents the whole of Wales, I see it as a national side.

"It's got a wonderful stadium here [at the Swalec], great members and supporters and we'd love it to be a first division four-day championship team."