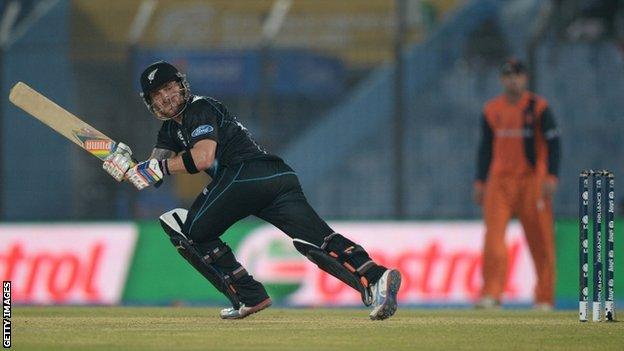 McCullum became the first man to reach 2,000 T20 international runs with 65 off 45 balls as the Kiwis chased down the 152 target with six balls in hand.

The Dutch, who managed a creditable 151-4, are out of the competition.

New Zealand face Sri Lanka on Monday in a shootout for a semi-final spot after South Africa knocked out England.

"It was a good performance by New Zealand. They were good in the field, especially finishing the innings well. They were tentative early on with the bat, but McCullum took the game away from the Dutch. They have a big encounter with Sri Lanka on Monday."

Put in to bat, the Netherlands made a stodgy start on a two-paced pitch, but gathered impetus in a 60 partnership between captain Peter Borren and Tom Cooper.

But the innings stalled after the dismissal of Borren for 49 at the end of the 18th over. Jimmy Neesham delivered five successive dot balls to new batsman Ben Cooper, with the Dutch adding only 10 runs in the last two overs.

New Zealand lost the out-of-form Martin Guptill to an ugly swipe in the fourth over, but soon set about chalking off the required runs with minimal fuss.

McCullum led the way with his 12th Twenty20 international half-century, while Kane Williamson (29) and Ross Taylor also chipped in.

Taylor smashed a huge six into the top tier of the stands, only to get out for 18 to the following ball from Timm van der Gugten when Wesley Baressi ran from behind the stumps to claim an impressive catch.

McCullum fell in the 17th over to a slower ball from Van der Gugten, but the big-hitting Corey Anderson rounded off the win with an unbeaten 20 off 14 balls.

"Netherlands put up a really good fight," said McCullum. "The surface was different than what we saw earlier, but the way we bowled in the last two overs pulled their total back."

Netherlands captain Borren said his opposite number was the difference between the two sides.

"He got them through. If we could have got him at some stage, it would have been a very different story."