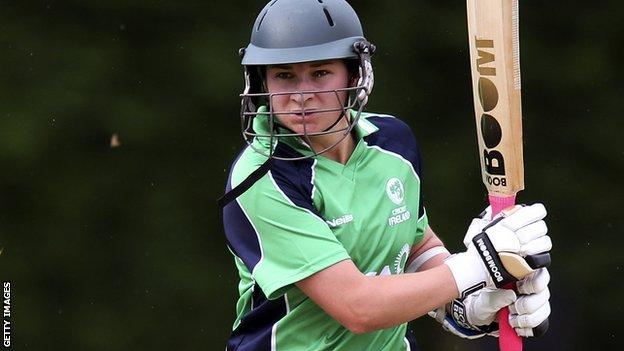 Ireland women lost their third group game of the Women's World Twenty20 as they fell to a crushing 86-run defeat by South Africa.

South Africa scored a remarkable 63 off the last three overs.

Despite Mary Waldron's 33, Ireland never threatened to reach a daunting target as they were bowled out for 79 with 4.5 overs unused.

Ireland were beaten by 42 runs in their first game against New Zealand, before losing to Australia by 78 runs.

In Saturday's other Group A game in Sylhet, Australia thrashed Pakistan by 94 runs.

Despite an opening stand of 57, Pakistan could muster only 91-9 as seamers Ellyse Perry claimed 3-12 and Sarah Coyte 3-14.

While Ireland and Pakistan battle for the wooden spoon on Monday, New Zealand face South Africa knowing a win will send them - and Australia - through, while a South Africa win would leave one of those three sides eliminated on net run-rate.