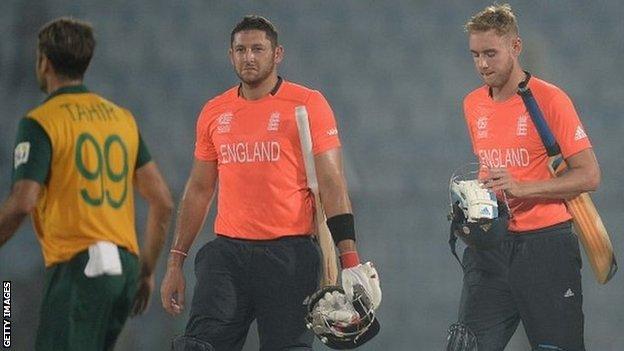 Defeat by South Africa came after a winter that saw an Ashes whitewash, the resignation of Andy Flower, spinner Graeme Swann's retirement and the discarding of batsman Kevin Pietersen.

"There's going to be a decision on the coach so there might be a few changes in the next two months," said Broad.

"England will rue the match against New Zealand, but I thought it was a spirited performance [against South Africa].

"Three wayward overs at the end, along with the brilliance of De Villiers, left a target that was always going to be a struggle."

"It's going to be new era of English cricket. Change can be exciting."

England, champions in 2010, needed to beat the Proteas and Monday's opponents the Netherlands to be sure of a place in the semi-finals in Bangladesh.

But captain AB de Villiers' 28-ball 69 carried his team to 196-5 and only some late hitting got England to within three runs as they closed on 193-7.

"We've come up three runs short and there's some pretty clear ways we could have stopped those runs," added Broad, who saw his side leak 55 runs in the final three overs of the South Africa innings.

"We missed chances - but that knock from AB was as good as you'll ever see."

As well as Pietersen and Swann, England were also without Luke Wright, Joe Root and Ben Stokes, all of whom are injured.

They chased down 190 to beat Sri Lanka in their previous match, but could not afford another defeat following the Duckworth-Lewis opening reverse to New Zealand.

England have won only 11 of the 26 Twenty20 internationals in which Stuart Broad has taken charge.

"We're disappointed to be out of a World Cup but we can hold our heads high," said Broad, who has presided over both World T20s since England were crowned champions and failed to reach the semi-finals in either.

"If we had got out of the group there'd have been a lot of surprised people. We're disappointed, but we did some pretty good stuff with the squad we had available."

The Nottinghamshire pace bowler has featured in more games for England than any other player over the winter and is in need of a two-month rest period for a long-standing knee problem.

He could not confirm if he will continue to captain, or even play, in T20s and will consult with England's new coach before finalising his schedule for the early part of the summer.

"I'm probably going to be unavailable for the start of the season one-day cricket-wise," added Broad.

"I don't know who is going to be the new coach and it will have to be run past whoever takes charge."

England play Scotland in a one-day international on 9 May, before a T20 and five one-internationals against Sri Lanka precede a two-Test series, which begins on 12 June.