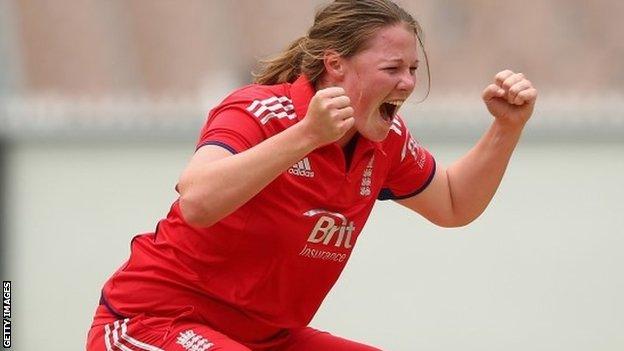 Pace bowler Anya Shrubsole starred as England clinched their place in the Women's World Twenty20 semi-finals with a seven-wicket win over Sri Lanka.

Shrubsole struck with the second ball and finished with 3-9 as only one player passed 10 in Sri Lanka's 85-9.

"The standard of cricket in the women's tournament has been awesome and there have been 9,000 or more fans in every day. There were some nerves against West Indies in England's first game, but the batters are starting to pick up their form."

Sarah Taylor made 36 and Heather Knight 21 to help the 2009 champions seal victory with 24 balls left.

England lead Group B with three wins from four games, but West Indies have one match left and could finish top.

Australia and New Zealand are favourites to qualify from Group A, with the semi-finals taking place in Mirpur on Thursday and Friday.

England produced an exemplary bowling display, with Shrubsole once again leading the attack in impressive style.

Thee 22-year-old Somerset seamer is the leading wicket-taker in the women's tournament with combined figures of 10-57 fom 16 overs.

Left-arm spinner Rebecca Grundy and seamer Jenny Gunn weighed in with two wickets apiece and Danielle Hazell and Natalie Sciver took one each.

Only Sri Lanka captain Shashikala Siriwardene, with an unbeaten 38, made it into double figures as the 2012 runners-up dominated.

In reply, Taylor and captain Charlotte Edwards put on 51 for the first wicket before Siriwardene had Taylor stumped for 36 and then trapped the skipper leg before for 17.

Knight fell with the scores level, but Sciver hit the winning run.

Edwards said: "We really back ourselves. We are in a good place going into the semi-finals. We have some outstanding talent in our group.

"We are looking forward to being in this part of the tournament now. We get to play in front of the big crowds and on the television. It really excites our team."

Earlier, also in Sylhet, India recorded their first win of the tournament, thrashing Bangladesh by 79 runs.

Hosts Bangladesh fell to their third successive defeat as they could only manage 72-8 in reply, as Jhulan Goswami (3-11) and Shubhlakshmi Sharma (3-12) did the damage.