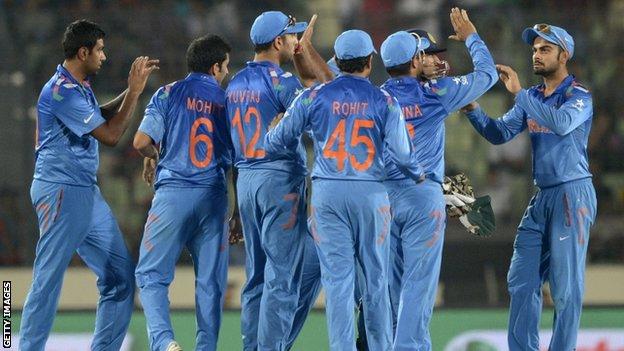 India confirmed their progress to the World Twenty20 semi-finals as Group Two winners as a pitiful Australia suffered their third consecutive defeat.

Australia, already out of semi-final contention, could not cope with India's spinners, collapsing to 86 all out in 16.2 overs.

Man of the match Ravichandran Ashwin took 4-11 and Amit Mishra 2-13.

"India are firing a few shots across the bows of the opposition teams. They are in good form and had a good all-round performance. Australia had nothing to lose but India have never lost after posting a score over 160. Australia could throw caution to the wind because they knew their tournament was over, but their shot selection wasn't the best."

India will face the Group One runners-up in the last four, while Pakistan will take on West Indies to decide the other Group Two qualifier on Tuesday after Australia's miserable tournament draws to a close in a dead rubber against hosts Bangladesh.

Australia skipper George Bailey said: "In all three of our innings, there's been a lack of match awareness. I don't think we've had any batsmen stand up and take responsibility to win the match, which has been disappointing."

Bailey's men started well against India as Rohit Sharma was surprised by some extra bounce from Brad Hodge in the first over and scooped a catch to point.

Virat Kohli, Ajinkya Rahane and Suresh Raina all followed inside the first 12 overs as Australia reduced their opponents to 66-4.

But India gradually rebuilt their innings, with Yuvraj and captain Mahendra Dhoni (24) steadily accumulating runs at first before tearing into the Australia bowling in a partnership of 84.

Both fell to extravagant late swipes as some tight bowling limited India to 12 runs in the last two overs.

Australia largely self-destructed with the bat as their tactic of trying to hit the ball out of the ground from the start backfired.

Maxwell was out to a particularly ill-judged shot, attempting to reverse sweep Ashwin's carrom ball, missing and watching the ball clatter into his stumps.

From then on, it was a procession as Bailey, Hodge and Brad Haddin were all caught slogging and Australia lost their last five wickets for 23 runs.

Ashwin's display earned him the man-of-the-match award, but Dhoni singled out Yuvraj for praise.

"We all know what kind of a player Yuvi is," said Dhoni. "He needed an innings like this to express himself and bring himself back into form.

"It was fantastic for him and for the team. He decided to give himself time as we needed a score of 150-160 plus. We all know what kind of firepower we have."