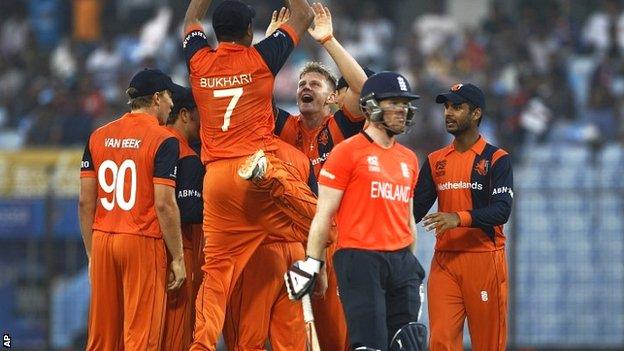 England's winter of discontent ended on a new low with an ignominious 45-run defeat by minnows Netherlands at the World Twenty20 in Chittagong.

But in reply England mustered only four fours and were all out in the 18th over for just 88. Bopara top-scored with 18.

"There really are some questions to be answered here. Realistically, can they give the job to Ashley Giles now?"

It echoed their four-wicket reverse against the Dutch at Lord's in 2009.

If 12 defeats in 13 matches against Australia on the Ashes tour was difficult to explain, a comprehensive thrashing by a part-time team who do not play Test cricket was even tougher to fathom.

It was certainly awkward viewing for interim coach Ashley Giles in his quest to be given the job on a permanent basis.

"Today was pretty embarrassing; it was a poor, poor performance," Giles said. "I still believe I can do the job for England. It's for other people to decide whether I can or not."

In their first afternoon match of the tournament - and so with dew less of a factor - England opted to field first and were still guilty of three dropped chances of varying degrees of difficulty.

Netherlands, who lost by only six runs to South Africa, made an impressive start with six fours in the first three overs as they rattled up 32.

Jade Dernbach, who conceded 26 in his final over against the South Africans, was omitted in favour of left-arm spinner Stephen Parry, but the Lancastrian was also expensive, conceding 15 from his opening six balls.

With England's bowlers beginning to restrict the scoring, Chris Jordan produced a moment of magic to dismiss Tom Cooper when he ran back from mid-off and nonchalantly caught the ball in his left hand, before pouching his dislodged sunglasses with similar panache in his right.

But though only two fours and a six were scored in the final nine overs, that catch proved to be the solitary highlight of England's day.

Against innocuous medium-pace bowling, the batting rapidly disintegrated, from the moment Michael Lumb drove tamely to short extra cover off the final ball of the third over.

Of the three players to reach double figures, only Jordan scored at a run a ball.

"We are stunned because they have not lost - they have been thrashed. What is so numbing is the margin - 45 runs is a massive margin, like an innings and 150 runs in a Test match.

"We will have to see what the implications are, and it shows the fragility of the England set-up right now."

Alex Hales, a match-winning centurion as England beat the top-ranked T20 side Sri Lanka last week, missed with an attempted pull and was bowled in the fifth over and key batsman Eoin Morgan was caught at slip for six as England fell to 42-5 at the halfway stage.

Jos Buttler could also only manage half a dozen as he mis-timed a pull at Logan van Beek's slower ball, the seamer finishing with remarkable figures of 3-9 from two overs.

Hopes rested with Bopara but with a desperate swipe he was caught at deep mid-wicket in the 16th over, another England batsman powerless to prevent defeat.