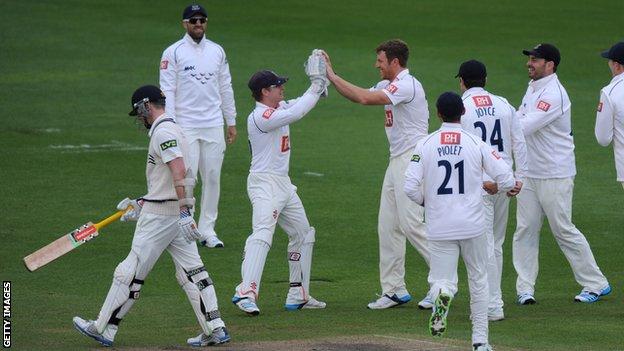 England Test hopefuls Sam Robson and Eoin Morgan both failed with the bat as Middlesex were skittled for just 105 by Sussex, with 13 wickets falling on the opening day of the season at Hove.

Morgan was bowled first ball by Jon Lewis, who took four wickets on his Sussex debut, while Robson fell for 11.

Matt Prior (32 not out) helped Sussex to 86-3 but bad light ended play early.

Sussex captain Ed Joyce had no hesitation in choosing to bowl first after winning the toss in gloomy conditions, as heavy overnight rain delayed the start by an hour.

Australian seamer Magoffin then removed his fellow countryman Chris Rogers for for just four, before Robson edged James Anyon behind with a loose drive.

Lewis, who moved to the County Ground from Surrey in the winter, picked up two wickets in as many balls as he had Neil Dexter caught behind and then sent Morgan's stumps cartwheeling to trigger a dramatic collapse which saw Middlesex lose seven wickets for just 29 runs.

Tim Murtagh picked up the early scalps of Joyce (12) and Michael Yardy (17), and James Harris removed Luke Wells as the hosts slumped to 42-3, but Prior sent a message to the England selectors by hitting seven boundaries to move Sussex to within just 19 runs of their opponents.

"After a rain-delayed start, and with the the floodlights on, both teams were desperate to win the toss and field first.

"However having lost only two wickets in the hour up to lunch, following the noon start, and having navigated their way to 57-2, Middlesex will be hugely disappointed with another middle-order collapse.

"Although it was clearly a bowler-friendly day, the visitors would have hoped that someone would have been able to grind some more runs out of their first innings.

"Jon Lewis rolled back the years with a four wicket burst just after lunch which really ripped the heart out of Middlesex, who will hope one of their bowlers can find a similar burst after Matt Prior and Matt Machan built a useful partnership before bad light set in.

"Prior was lucky to survive when Toby Roland-Jones dropped him at long leg off Steven Finn and that could prove a crucial moment in what surely will be a low-scoring match throughout."

"It was advantage Sussex after day one at Hove with Matt Prior and Matt Machan steering them to a first innings deficit of just 19, with seven first innings wickets in hand.

"Prior looks like a man on a mission. His innings was full of positive intent and crisp shots, and Middlesex will rue dropping him when he had made just 10.

"Earlier in the day Sussex, having won the toss, exploited the bowler-friendly conditions to the full, and Jon Lewis showed he can be another shrewd Sussex signing with the 38-year-old taking 4-34."