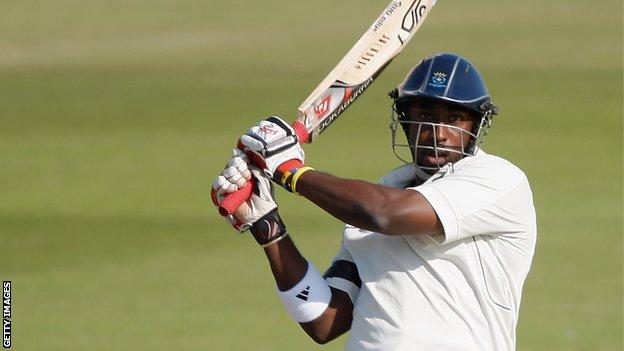 Michael Carberry's return to Hampshire duty ended with a fourth-ball duck on day one of their opening Championship match against Worcestershire.

The England man was trapped lbw by Chris Russell as Hampshire stumbled to 37-3 during the 8.5 overs of play possible because of constant drizzle.

Hampshire coach Dale Benkenstein admitted they would have preferred to bowl first given the conditions.

"Tomorrow could be a tough day to bat again, but that will set-up the game," he told BBC Radio Solent.

"At least it is not a flat Rose Bowl wicket. There is definitely some life in there. I think it is set up to be a good game. There is going to be enough for the bowlers as you've seen that you can get wickets but if you miss your areas, Jimmy showed you can bat well."

Worcestershire's team had an average age of just 24 and they gave Championship debuts to Morris and 19-year-old batsman Tom Kohler-Cadmore, the latter having not previously played a first-class match.

"Both sides wanted to bowl first, but it was Worcestershire's Daryl Mitchell called correctly.

"Michael Carberry left the first five balls of the game outside off stump, then missed the sixth and was leg before.

"Only Jimmy Adams, with some crisp drives, looked at home on a bowler-friendly surface.

"Unfortunately, more rain is for forecast for day two."