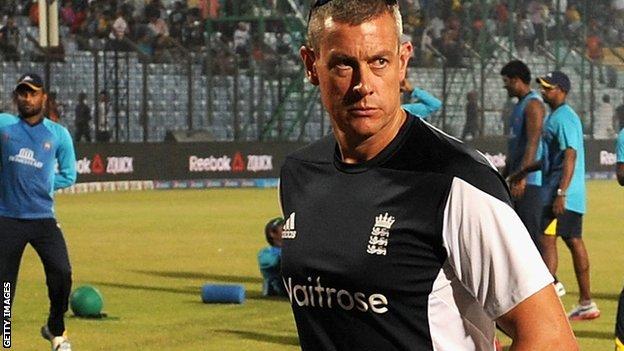 Ashley Giles says he still wants the job as England's new head coach despite a 45-run defeat by minnows Netherlands in the World Twenty20.

Set 134 to win, England were bowled out for 88 in Chittagong.

Limited-overs coach since 2012, he added: "Days like this are tough. I'm sure the players are hurting and it's certainly tough for me as a coach."

After Test coach Andy Flower stood down following England's 5-0 Ashes series defeat, the England and Wales Cricket Board took the decision to appoint one coach for all formats of the game.

Giles has been tipped for that role, along with the likes of South African Gary Kirsten.

"I'm not sure that one performance has changed my mind," added Giles. "You have bad days at the office and I still believe I can do the job."

Part of the England side that reclaimed the Ashes for the first time in 16 years in 2005, the former spinner admitted the loss to the Dutch was "embarrassing".

"Guys have to take individual responsibility to get the job done and we did not do that today," he said. "You have to use that word complacency, there can be nothing else for it."

Captain Stuart Broad said the result was down to "a lack of commitment and hunger in our shots".

He added: "We didn't deliver and it's hugely disappointing. No-one got going and no-one took responsibility.

"We said all the right things before the game, but we didn't deliver. There are no excuses. It was a relatively simple chase, but a shocking chase."

Broad acknowledged his team had "let the fans here and English cricket fans back home down", adding: "It's been a horrendous winter."

After the Ashes were surrendered 5-0, Australia won the subsequent 50-over and T20 series 4-1 and 3-0 respectively.

England then played West Indies in the Caribbean, winning the 50-over series 2-1 before losing the T20 series by the same margin.

The six-wicket win over Sri Lanka was England's only victory in four outings at the World T20.