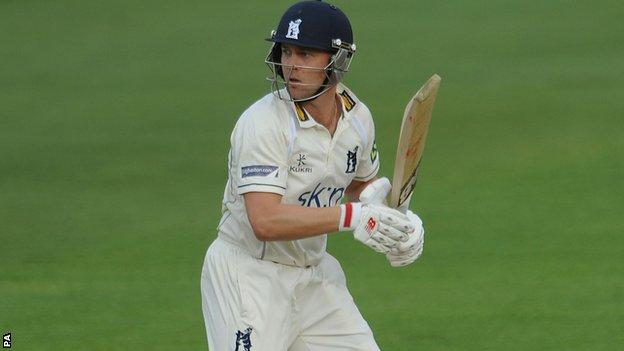 Batsman Trott made his comeback for Warwickshire in a two-day friendly against Gloucestershire at Edgbaston.

The 32-year-old only lasted 19 balls before falling lbw, offering no stroke, to left-arm seamer David Payne.

Trott left the Ashes tour following the first Test in Brisbane in November with what was described at the time as a "stress-related illness".

And Warwickshire granted him time for a family holiday while the team went on a pre-season tour of Barbados.

Trott only managed 19 runs in two innings in the Brisbane Test, when he was twice dismissed by Mitchell Johnson, coincidentally also a left-armer.

Earlier this month, however, Trott explained his departure from Australia by insisting he was "burnt out, but not depressed".

It led to criticism from former England skipper Michael Vaughan, who wrote in a newspaper column that he felt "conned" because everyone had been "allowed to believe that he [Trott] was struggling with a serious mental health issue".

Following his hiatus and sessions with a psychologist, Trott has set his sights on reclaiming his place in the England team this summer.

The first step will be to score runs for Warwickshire, who begin their County Championship campaign against Sussex, starting on 13 April.

Trott has scored 3,763 runs at an average of 46.45 in 49 Test appearances, including nine centuries, and has also represented England in 68 one-day internationals and seven Twenty20 matches.