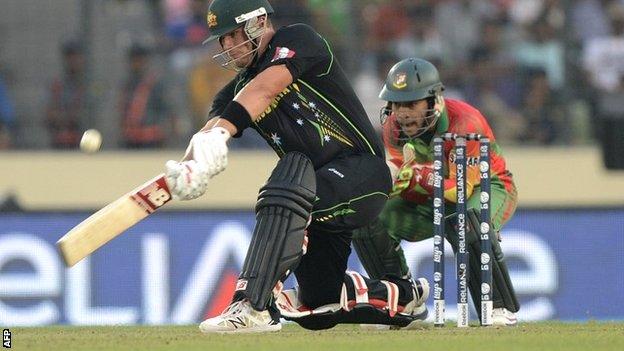 Australia completed their World Twenty20 campaign with a seven-wicket victory against Bangladesh in Mirpur.

Both teams were already out having lost their first three games and were trying to avoid finishing bottom of Group Two.

Bangladesh, who had won only once in 25 previous meetings with Australia across all formats, lost both openers inside four overs.

Shakib had told a local newspaper that Bangladesh should not play home matches for two years because of the expectations on their players.

But he appeared to thrive on the pressure, smashing Doug Bollinger and Shane Watson for leg-side sixes and reaching his fourth T20 half century from 40 balls.

Although captain Mushfiqur was caught by Glenn Maxwell at deep mid-wicket in the 17th over and Shakib was superbly taken by the same fielder diving forward in a similar position in the next, the Tigers recorded their highest total in the four group games.

However, Finch and opening partner David Warner were rarely threatened by a Tigers bowling unit dominated by spin.

On 41 Finch appeared to edge into the gloves of Mushfiqur up at the stumps but was given not out, the feisty Bangladesh captain confronting the ever-combative Warner to express his views.

There was added delight therefore for the spirited Tigers when Warner was bowled for 48 attempting an ungainly heave.

The powerful Finch, whose fifty spanned 35 balls, was brilliantly caught low by Nasir Hossain running in from deep cover with 19 runs required, but victory had long since been a certainty.

Debutant seamer Taskin Ahmed, 18, bowled Maxwell with an inswinging full toss but Australia skipper George Bailey ended the match in style with a six over long-off.

"It has been a little consolation," said Australia captain George Bailey. "All the things we wanted to do, we did today."

Bangladesh captain Mushfiqur said: "We did not finish our innings well. The pitch was playing well and we should have got more runs."