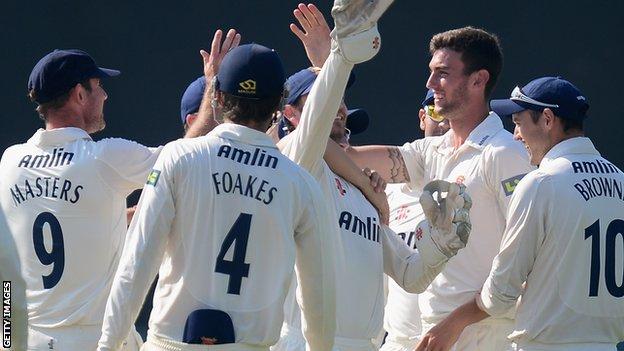 Essex head coach Paul Grayson has said his team will start the season without an overseas player.

The Chelmsford side begin their County Championship Division Two campaign against Derbyshire on Sunday, 13 April.

But they could wait until May before bringing in a foreign import.

"We're just holding fire to be honest," Grayson told BBC Essex. "I'm feeling really comfortable and confident with the squad we're going to have for the first month of the season."

Essex will have England captain Alastair Cook, in his benefit year at the County Ground, and his international team-mate Ravi Bopara available for the duration of April.

And Grayson believes the pair will compensate for a lack of overseas talent.

"We're going to see how the squad is developing, maybe two or three weeks into the season.

"If we pick up any injuries on the bowling front we may need a bowler, otherwise we may go for a batsman."

Grayson's only injury doubt for the season opener is that of seamer Reece Topley, who is recovering from a stress fracture in his back.

Essex narrowly missed out on promotion to Division One last year, and despite their association with limited-over cricket in recent years, Grayson insists a return to the top flight for the first time since a one-year stint in 2010 is the priority.

"It's always Championship cricket for me. We'll never win Division One while we're in Division Two," he said.

"The guys are desperate to get up this year. It's always been my most important competition. Some people will say that we focus all our energies on one-day cricket - that's wrong.

"We want to get up and play the likes of Lancashire, Yorkshire and Nottinghamshire."