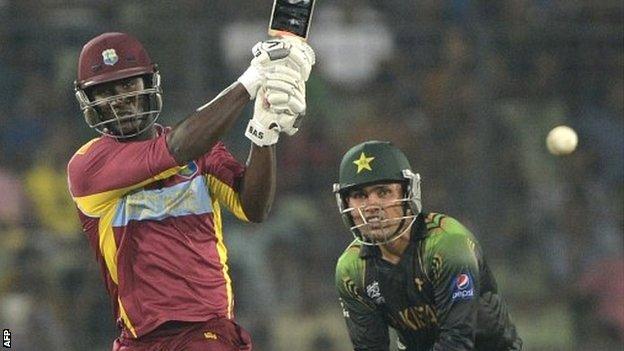 Defending champions West Indies secured a World Twenty20 semi-final against Sri Lanka on Thursday with a magnificent 84-run win over Pakistan in Mirpur.

In a shoot-out to decide who went through to the last four, West Indies hammered 82 off the last five overs.

Pakistan lost a wicket first ball and were 82 all out in the 18th over.

It was another irresistible performance from the stylish Windies, who have won three successive games since a seven-wicket defeat against India in their opening match.

Skipper Sammy said: "We are improving at every game. There is still room for improvement but we are happy to be in the semi-finals."

Sammy, who inspired West Indies to victory over Australia with consecutive sixes, produced some more remarkable hitting to revive his team from a mediocre start.

Cavalier left-hander Chris Gayle was easily stumped in the third over and his opening partner Dwayne Smith fell cheaply in the next.

But Bravo, who came to the crease in the 11th over at 61-3, unleashed some flamboyant strokes with a delightfully extravagant follow-through, launching paceman Umar Gul for successive sixes as 21 came from the 18th over.

The next amassed 24 as the spin variations of Saeed Ajmal were dispatched for three sixes and a four by the fluent strokeplay of Bravo and the brutal hitting of his captain.

Pakistan, chasing a total for the first time in the tournament, made the worst possible start when a late inswinging yorker from left-arm seamer Khrishmar Santokie trapped Ahmed Shehzad in front.

Kamran Akmal perished in the next over and his brother Umar, who made a sparkling 94 against the Australians, was deceived by Samuel Badree's googly to become the first of Denesh Ramdin's four stumpings, which equalled the T20 international record.

Pakistan were 13-4 after the six powerplay overs and leg-spinner Badree had figures of 3-5 from his first three.

Although Shahid Afridi pulled Smith into the upper tier of the stand at deep mid-wicket, he was one of two wickets to fall to Sunil Narine in the 16th over as the spinner finished with 3-16.

Pakistan skipper Mohammad Hafeez said: "In the first 16 overs we restricted them very well but in the last four they took the game away from us."