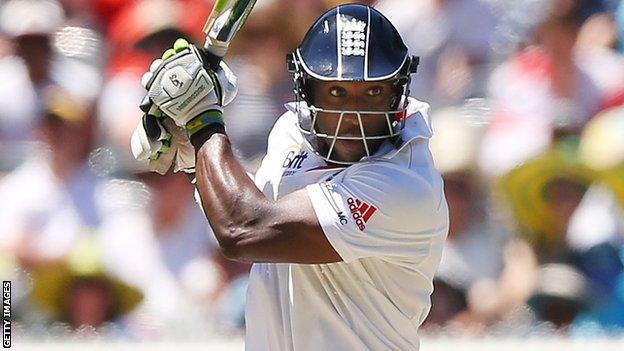 Carberry was taken to Australia this winter, playing all five Ashes Tests.

But the 33-year-old Hampshire batsman recently claimed in the Guardian he was not told why he was left out of the one-day series or World Twenty20.

"I don't think, from Michael's point of view, those comments will necessarily assist his career," Bransgrove said.

Carberry ended as England's third-highest run-scorer with an average of just over 28 in their ultimately doomed Ashes campaign.

Speaking specifically about Ashley Giles, England's one-day coach who hopes to replace Andy Flower in overall charge, Carberry said: "It's that age-old word, man-management. I had a brief chat with Ashley during the fifth ODI in Adelaide [about why the left-hander was not being picked]. His response was that he didn't really know. If you don't know mate, I sure as hell won't know."

Bransgrove says the England and Wales Cricket Board will not take kindly to Carberry's comments.

"We don't have an administration that really welcomes appraisal or criticism," he told BBC Radio Solent. "I don't suppose those comments will be particularly well received.

"As constructive or as helpful as they may be in the right forum, probably putting them in the public domain is not that helpful. But, as far as I am concerned, everyone is entitled to voice their own opinion."

Hampshire's new first-team coach Dale Benkenstein feels Carberry has not yet been given a proper chance in international cricket.

"It's a tough one because maybe his international career is over now anyway and he feels hard done by the situation and that goes back to consistency of communication," Benkenstein said.

"When you select someone for a Test team you've got to give him a chance as it is a totally different level. You can make as many runs as you like at county level, it counts for nothing.

He is still the opener incumbent and they haven't named a Test side since. He quite rightly feels like he should have had a crack in the one-day side over the winter

"An example is Jacques Kallis, who after eight Tests was averaging eight and he went on to be quite good. They knew once they selected him he was the future and was to be given a decent go.

"Carberry actually didn't do that bad either. The one-day side was losing and he has an even better one-day record so I find it very tough to have a go at him. He is being honest and sometimes those comments must be taken to heart."

Carberry claims he still wants to play for England in the future but does not necessarily feel he will get the chance.

And Hampshire captain Jimmy Adams feels the opener could have timed his comments better.

"I did say to Carbs that I thought the timing was a little bit skew-whiff," Adams said. "He is still the opener incumbent and they haven't named a Test side since. He quite rightly feels like he should have had a crack in the one-day side over the winter."