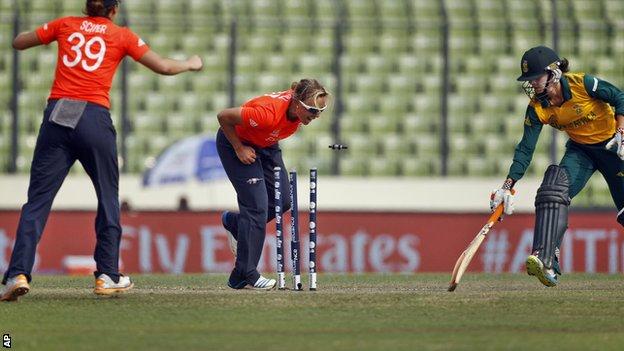 After Anya Shrubsole took two early wickets, England were aided by five run-outs to dismiss South Africa for 101, with only Chloe Tryon (40) and Mignon du Preez (23) in double figures.

Sarah Taylor's unbeaten 44 took England to their target inside 17 overs.

England, champions in 2009, meet their 2012 conquerors Australia in Sunday's final in Mirpur.

That not only gives Charlotte Edwards' side the opportunity to avenge their defeat in Sri Lanka two years ago, but also completes a 12-month period that has seen them regain the Ashes at home, then successfully defend them down under.

"This gives us confidence going into the next game," Edwards told Test Match Special. "The batters are batting well and the bowlers have been exceptional all tournament. It was more of the same today.

"Anya was exceptional up front. She's been brilliant, as she has been for the past 12 months. How she is performing is no surprise."

"I am really excited about the final. The two sides are looking great and are equally matched. Anya Shrubsole v Meg Lanning will be a fantastic contest.

"Australia's batting has been consistent and now England are starting to peak. It will be a tight match - England lost the T20s in the Ashes - and I probably won't sleep between now and the final."

Without injured bowlers Katherine Brunt and Laura Marsh, as well as spinner Holly Colvin - who has taken a break from cricket, England have looked to Shrubsole to lead their attack in Bangladesh.

The Somerset seamer has responded with 12 wickets, the most in the tournament, and it was she who again set the tone against South Africa.

"The best way to stop the runs is to take wickets, particularly in the first six overs," said Shrubsole. "I've been around long enough now to be able to step up.

"We're working really well as a bowling unit and hopefully that can continue into the final."

The run-outs of Dane van Niekerk and Marizanne Kapp pushed South Africa into deeper trouble, before captain Du Preez and Tryon combined to add some respectability to the score.

But, after Du Preez was brilliantly caught at deep mid-wicket by Lydia Greenway off Grundy, Tryon was left to play a lone hand.

She was comically involved in the run-out of Sune Luus, when the pair collided in the middle of the pitch, and was the last wicket to fall, bowled attempting to slog-sweep Nat Sciver.

In the pursuit of such a modest target, England were virtually untroubled, with the partnership of Taylor and Edwards only broken when the skipper patted a return catch to spinner Luus to fall for 36.

But, joined by Heather Knight, Taylor continued to prosper and finished the job with 19 balls remaining with a scoop off the pace of Shabnim Ismail.