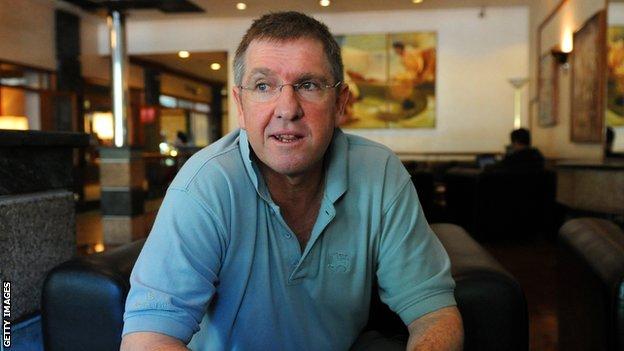 Bayliss, 51, is among the leading contenders to land a new position as head of all senior England teams following Andy Flower's departure.

"England no doubt feel a new coach will need to manage a few people and that is his real strength," Lawson said.

"He's relaxed, calming and able to get the best out of players."

He added: "He never gets overly excited or overly depressed by the game or by performances and he's got great knowledge."

England batsman Michael Carberry, who played in all five Tests during last winter's Ashes whitewash in Australia, has criticised the man-management skills of the England coaches.

Lawson, 56, was instrumental in New South Wales' appointment of fellow Australian Bayliss, who arrived as coach in 2013 after leading Sri Lanka to a narrow defeat in the 2011 World Cup final and winning the Indian Premier League title with Kolkata Knight Riders in 2012.

England and Wales Cricket Board chief executive David Collier and managing director Paul Downton will meet with candidates for the position of England head coach in the week beginning 14 April, with a shortlist also understood to include Lancashire coach Peter Moores - the former England coach - and Nottinghamshire director of cricket Mick Newell.

England limited-overs coach Ashley Giles, who ended their failed World Twenty20 campaign on Monday with a shock defeat by the Netherlands, is also regarded as one of the favourites for the role.

New South Wales said there was an "initial approach" by the ECB, and that Bayliss was "willing to listen to them if they approach him again".

Lawson, who played 48 Tests between 1980 and 1989, said Bayliss would want the option to recall former England batsman Kevin Pietersen, who was sacked following the 5-0 Ashes whitewash by Australia, should he be appointed.

"That would be a big part of any equation," Lawson said in an interview carried by Cricket Australia's website. "As any head coach in international cricket these days, you've got to have control in what happens around you.

"It's like being made the boss of a business. If they give you staff you're not happy with and they don't do the job, the business crashes, so all those things would need to be in place."