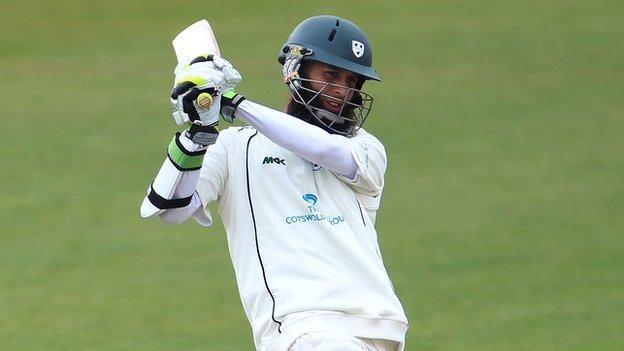 The 26-year-old is in the squad for the County Championship Division Two opener against Hampshire at Southampton, which starts on Sunday.

"He will be available to play on Sunday in our first game against Hampshire."

Moeen Ali was last year's top run scorer in the County Championship, making 1,375 runs in 16 matches at an average of 62.50.

After making the breakthrough at international level with England this winter, playing in nine limited-over matches and making the Twenty20 squad in Bangladesh, his next target is being picked for the one-day international against Scotland in Aberdeen on 9 May.

But, despite Moeen having only flown home from the sub-continent on Tuesday, Leatherdale has confirmed that Worcestershire's star turn is free to play for the county until then.

"England pick their one-day squads in early May for the Scotland game," said Leatherdale. "Moeen is with us for the start of the season and free to play.

"Moeen has had his opportunity and taken his chances in a couple of games and hopefully, while it has been tough for the last couple of T20 games, he will be part of the set-up for the summer.

"It is a very much a new era for England. Obviously Moeen did brilliantly last year, which got him in the England fold, and he has probably got to continue that on.

"If he carries on the consistency he has shown in the last 12-18 months, then hopefully he will be part of the England set-up for quite some time.

"The balance for him is how far he can push on from the one-day stuff into the next level.

"Obviously England will decide who is going to be running the show in the next month or so and hopefully Moeen will be part of it."