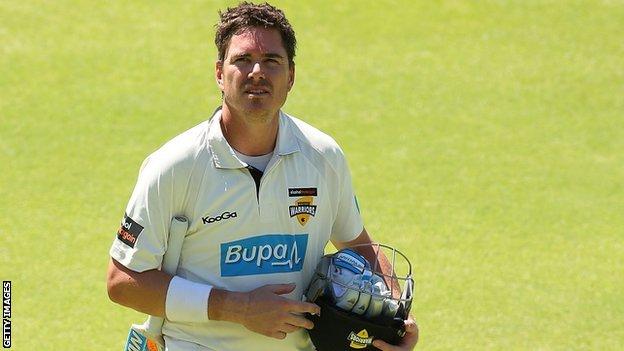 Derbyshire have signed former Australia batsman Marcus North as their second overseas player for the 2014 season.

The 34-year-old, who scored 1,171 runs in 21 Tests, announced his retirement from first-class cricket this week.

But he will be available to play in all formats of the game for Derbyshire when West Indies batsman Shivnarine Chanderpaul is unavailable.

Elite performance director Graeme Welch said: "To have a player of Marcus's experience and calibre is massive."

He continued: "The beauty is that he can take over as our overseas player in one-day and four-day cricket when Shiv is likely to be playing international cricket during the all important run-in to the end of the season. We think he's a very shrewd signing in that respect.

"I captained Marcus when he played for us in 2006 and the class he showed with his batting was unbelievable."

North, who played for Glamorgan last summer, captaining the county in one-day cricket, added: "I am delighted to be coming back to Derbyshire.

"I really enjoyed my stint there a few years back under Graeme Welch, so I am excited to be working with him again.

"I've enjoyed arguably one of my best seasons in Australia [scoring 886 runs at an average of 63.28 for Western Australia in the Australian Sheffield Shield], so the opportunity to play this specific role for Derbyshire was very exciting and has come at the perfect time in my career."