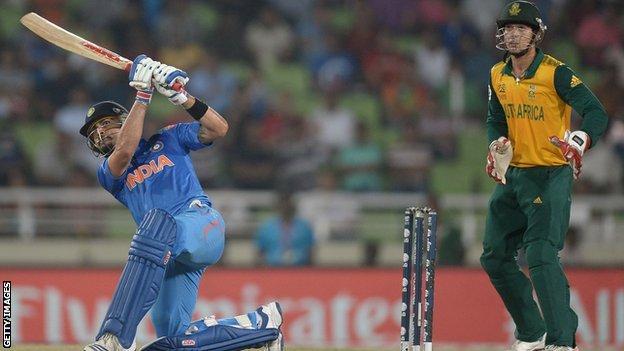 Virat Kohli guided India to a six-wicket win over South Africa and a World Twenty20 final meeting with Sri Lanka in Mirpur.

Faf du Plessis's 58 and 45 not out from JP Duminy had earlier carried South Africa to a competitive 172-4.

But Kohli gave India the opportunity to add to the World Cup and Champions Trophy titles they already hold.

"It was a valiant effort by South Africa to get to 170. With the dew coming on, the surface has got better into the evening, the ball has slid onto the bat. But India have batted superbly. Virat Kohli is the star of the show. He hasn't hit that many boundaries, he just moves the ball around superbly. When he does get a bad ball he punishes it. Sometimes you have to admit that you came up against the better team."

Having easily won their four group matches, India, the tournament's inaugural champions, nervelessly paced their chase to come through their sternest test so far.

Kohli, the leading run-scorer in the latter stages of the tournament, expertly eschewed the pursuit of boundaries in favour of manoeuvring the ball and scampering between the wickets.

And, when Suresh Raina arrived to take 17 runs from the 17th over of the innings, delivered by Wayne Parnell, India were as good as home.

Though Raina fell to a Beuran Hendricks slower ball for an important 10-ball 21, Kohli took the scores level in the same over.

Captain Mahendra Dhoni calmly blocked his only delivery, allowing Kohli to batter through mid-wicket and book a repeat of the 2011 World Cup final, which India won.

"I had to keep my cool," said Kohli, who faced only three dot balls. "Against a world-class bowling attack it is not easy to get boundaries.

"It was about sticking in there and believing in myself. I kept telling myself I was good enough to catch up later. I backed myself throughout."

That India's chase was manageable was thanks mainly to a spell of 3-22 from Ravichandran Ashwin that checked South Africa just as they were threatening to get away.

On a pitch offering plenty of encouragement to the slow bowlers, Ashwin had already produced a beauty to bowl Hashim Amla before returning to remove the dangerous pair of Du Plessis and AB de Villiers.

Amla's closed face was beaten by a ball that pitched outside leg stump and hit off, while De Villiers holed out to deep square leg after Du Plessis was bowled off his body attempting a sweep.

Prior to that, captain Du Plessis took advantage of some unusually wayward Indian bowling, regularly heaving the off-breaks of Raina through the off side.

At the other end, Duminy began quietly but, helped by David Miller's 12-ball 23, added 36 in the final three overs.

India openers Rohit Sharma and Ajinkya Rahane began the pursuit in rapid fashion but, after Rohit hit Hendricks straight up in the air, Rahane was subdued and eventually shovelled Parnell to the hands of De Villiers on the leg-side boundary.

With some loose South African bowling going unpunished, there was a hint that India may be left too much to do.

But that was to discount the calm chasing of Kohli and, in the end, India's victory was comfortable.