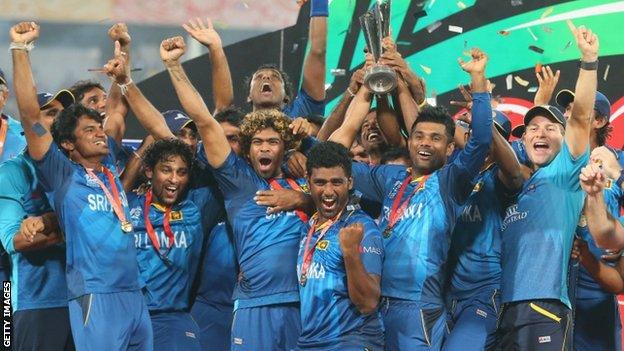 Kumar Sangakkara guided Sri Lanka to a six-wicket victory over India to win the World Twenty20 in Mirpur and end a run of four defeats in global finals.

Sangakkara, playing his final Twenty20 international, scored 52 not out as Sri Lanka chased down 131 in 17.5 overs.

"India had been flawless throughout the tournament but they mucked it up today. Sri Lanka - almost everyone's second favourite team - bring joy to almost everyone at the end of what has been a great tournament. The players have enjoyed what is a brilliant format."

Sangakkara and veteran team-mate Mahela Jayawardene were involved in all four of those disappointments, and this was a fitting way for both to bow out of international T20 cricket.

Victory was particularly sweet for Sangakkara, who had scored only 19 runs in his previous five innings in the tournament but oversaw a patient run chase that was finished off in style when Thisara Perera clubbed Ravichandran Ashwin for his third six.

World Cup and Champions Trophy winners India were hoping to become the first team to hold all three limited-overs trophies.

But their quest was undermined by a disappointing batting performance that stalled badly after Rohit Sharma drove to short extra cover in the 11th over for 29 to break a second-wicket partnership of 60 with Kohli.

Yuvraj Singh, so often a destructive batsman in the shorter forms of the game, looked horribly out of touch as he scratched around for 11 off 21 balls.

With Kohli starved of the strike, the innings lost all momentum and even Mahendra Dhoni could add only four from seven balls after Yuvraj's tame lob to long-off finally brought the captain to the crease in the penultimate over.

The final four overs, in which Kohli faced eight balls, yielded just 19 runs before the tournament's leading run-scorer was run out trying to force a second from the last ball of the innings.

There was a wicket apiece for Nuwan Kulasekara, Angelo Mathews and Rangana Herath as not one of Sri Lanka's five bowlers conceded more than 29 runs from four overs.

India took wickets with enough regularity to keep the match alive and evoke memories of the 2012 final, when Sri Lanka were bowled out for 101 in pursuit of West Indies' modest 137-6.

Kusal Perera sliced Mohit Sharma to mid-off in the second over and Tillakaratne Dilshan holed out to Kohli at deep square leg for 18.

Jayawardene swiped Suresh Raina to midwicket to depart for 24 and, when Lahiru Thirimanne nicked Amit Mishra to wicketkeeper Dhoni, Sri Lanka were wobbling on 78-4.

But Perera announced his intent by hitting Mishra over long-on for a huge six and followed up with another maximum in the leg-spinner's next over.

Sangakkara thrashed consecutive fours off Ashwin to reach his half-century and take Sri Lanka to within four runs of the title.

Perera danced down the track to apply the perfect finish and spark jubilant scenes among the Sri Lanka players and fans.