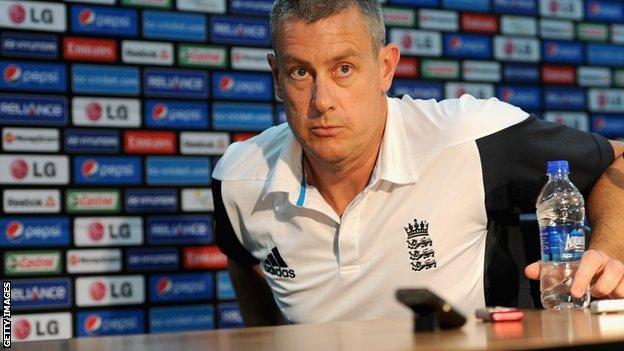 England hope to appoint a head coach within the next month, according to England and Wales Cricket Board chief executive David Collier.

Interviews will take place this month for a successor to Andy Flower, who resigned in January after the 5-0 Ashes loss in Australia.

"We will be interviewing this month and hopefully have an appointment before the start of the season," said Collier.

England's next match is a one-day contest against Scotland on 9 May.

That precedes a limited-overs and Test series against Sri Lanka, which starts with a Twenty20 match at the Oval on 20 May.

"It's a fact there are a limited number of coaches around the world at this present time.

"You've only got to look at the media speculation of who might or might not be on lists to see that there are not too many names on that.

"But we're very satisfied that the top people are applying and I know Paul is being very, very diligent in going through all of that list."

Giles was in charge for England's disappointing World Twenty20 campaign in Bangladesh, in which they failed to progress beyond the group stage and bowed out with a shock defeat by the Netherlands.

Asked about the former England spinner's chances of being appointed, Collier said: "It's very unfair to talk about one individual candidate when there will be four or five people interviewed."

Spinner Graeme Swann retired during the Ashes and batsman Kevin Pietersen was sacked after the tour, and Collier says the rebuilding process offers plenty of competition among players.

He added: "I can't remember in my time the opening month of the county season being so critical.

"Somebody has the opportunity to earn their place in the England side and that is very good thing for county cricket."