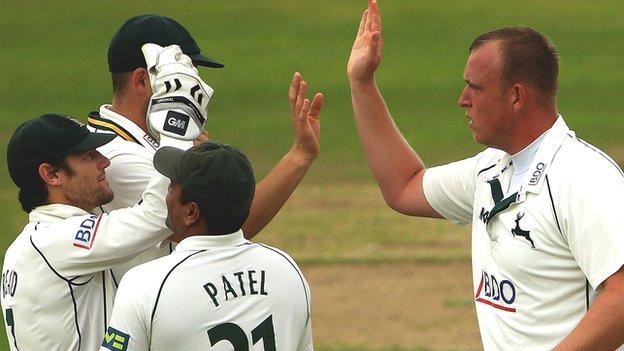 Nottinghamshire's bowlers enjoyed the better of a rain-hit second day against Lancashire at Trent Bridge.

Lancashire, who trail by 195 runs on 77-6, never got going, Luke Procter proving their top scorer so far on 18.

Notts earlier added two runs to be bowled out for 272, Kabir Ali (3-66) taking the final wicket to fall.

Notts turn to the new Ball

New-ball pair Fletcher and Gurney made immediate inroads to leave Lancashire on 4-2.

Horton was trapped lbw by Fletcher for a 22-ball duck before Luis Reece followed in the next over, feathering a catch behind off Gurney.

Andrea Agathangelou (17) spent nearly an hour at the crease, before letting a Carter delivery crash into his off-stump.

Nottinghamshire-born Ball then took his first Championship wicket in his first over, having former Notts man Ashwell Prince (16) caught behind by Chris Read.

Medium pacer Ball was not always on the money, two fours for Procter and a wide showing signs of nerves.

But he came straight back to dismiss Procter leg before, Mullaney then grabbing the wicket of Alex Davies with his third ball, before heavy rain brought an early finish.

"Competition for bowling places has never been more competitive at Trent Bridge.

"But for a variety of circumstances, Lancashire could have been facing Siddle, Adams, Broad and Shahzad in this match.

"As it was, a quartet of Fletcher, Gurney, Carter and Ball stepped up to the mark to leave the visitors first innings in tatters.

"To compound matters, just before the premature close, the ball was thrown to former Red Rose player Steven Mullaney and his third delivery put him amongst the other wicket takers also.

"Fired up for the challenge, with or without the star names, Notts are looking hungry at the start of the new campaign."

"It's difficult to judge any batsman in conditions which are so bowler friendly, but the storm clouds and torrential rain certainly came at a good time for Lancashire.

"The Red Rose are in trouble after a difficult afternoon session in which Lancashire just couldn't find a partnership to stifle the home side's attack.

"Nottinghamshire, on the first day, were able to conjure up a partnership between Patel and Hales to get themselves out of bother, Lancashire need to do something similar tomorrow."