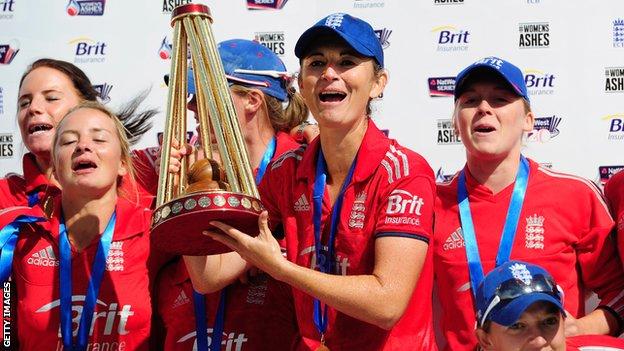 Charlotte Edwards sits on a bench in front of the most famous building in cricket, the red brick splendour of the Lord's pavilion.

It's a place where anyone can feel instantly immersed in history. But there is no longer any reason for Edwards to be overwhelmed by the past. After all, she is now a Wisden Cricketer of the Year.

WG Grace, Jack Hobbs, Imran Khan, Brian Lara, Sachin Tendulkar, and so on. Cricket's tales have been told through the achievements of great men. But, after Claire Taylor in 2009, Edwards becomes the second woman to be chosen.

When Edwards was born female cricketers had to fight to be taken seriously. They even worried about being allowed to stand in the very place where Edwards now talks proudly in her England tracksuit.

The Lord's pavilion, with its ornately revered Long Room, was for men only. That created a near-farcical situation as England and Australia prepared for a Test at Lord's in the 1970s. The players wondered how they would actually walk onto the field, as all-rounder Enid Bakewell tells the BBC.

"It wasn't until 1976 that Lord's let us have a televised match there, and when we first went there I don't think they were going to allow a woman in the scorebox," she says.

Bakewell is now 73. She still lives in the Nottinghamshire village where she grew up, barely a mile from the school where the great bowlers Harold Larwood and Bill Voce were educated.

This is cricketing country, a resilient community that experienced some of the worst trials and divides of the miners' strike. It was here, in the late 1940s, that Bakewell learned to play cricket.

She showed me the place: a rough field of ankle-high grass on a hilltop opposite a cemetery. She and some local boys would play their games there after being chased off the outfield at the village cricket club.

"We had hedge shears and scissors and we cut out a pitch just big enough for a wicket because the long grass had slugs and you used to lose the ball in it.

"It helped me. With that sort of surface, you daren't let the ball pitch so I used my feet, and that helped me get the confidence to play."

I ask if anyone coached her. "Oh no," she says. "At senior school we weren't allowed to play cricket - too 'unladylike'. In fact, whistling was too 'unladylike' then. But I managed to join a team in Notts because the PE teacher knew someone who played for them.

"I didn't have any coaching. I went to Lilleshall when I was 18 but I was a natural player and I just loved playing. We played virtually every evening until we lost the ball or it got dark or we were too hungry to stay out."

The unorthodox and improvised cricket education certainly worked. Bakewell enjoyed an England career that marks her out as an outstanding player in an era when women's cricket often went unnoticed.

She has her own retrospective recognition in this year's Wisden. Her Test batting average was almost 60, she scored a hundred in the World Cup final of 1973 (which predated the first men's World Cup final) and in her last Test she made a century and took 10 wickets with her left-arm spin.

The 2014 edition of Wisden celebrates the five greatest female cricketers:

Enid Bakewell: A PE teacher turned England great. Scored three hundreds in her first five Tests. Averaged almost 60 with the bat and a mere 16 with the ball.

Belinda Clark: Led Australia to two World Cups. The first player - male or female - to make a double century in an ODI.

Mithali Raj: Has captained India on and off for a decade, leading them to their first Test win over England in 2006. A veteran of 190 internationals.

Bakewell's first opportunity came in 1968 when she was selected to take part in a four-and-a-half-month tour to Australia and New Zealand with England.

She made a hundred in the first Test, but that was the easy bit. Far harder was the "trauma" of leaving her two-and-a-half-year-old daughter Lorna behind. Her husband and parents stepped in, although Enid also had to pay her own way.

"I had to raise £603 for the air fare," she says. "So I went back to work teaching, I sold paperback books, I sold potatoes out of the garden, we had a coffee morning, and I wrote round locally to anyone who had any money who might be a benefactor. Eventually I raised it."

Leap forward to 2014, when Edwards is a professional cricketer. The progress still surprises even Edwards.

"I couldn't have ever imagined I would have had such a great career and hopefully more to come.

"I never thought I'd be stood here as a professional women's cricketer, so that's something I'm incredibly excited about for the next few years - to hopefully keep playing and be involved in that professional era. But, equally, I'm very proud of where the games come from as well."

For Bakewell, there was no route towards cricket as a career; it wasn't even within the scope of her imagination.

She says: "I would have absolutely revelled in it. I wanted to be a man, to play professional cricket. That was my ambition when I was a kid.

"I think the Wisden award is wonderful for Charlotte - she's such a wonderful person. I saw her play at 12 and she was captaining a boys' side, and I thought, 'you've got to be good, lass'."

Bakewell is still playing. When we meet she is wearing her MCC jumper and has a kit bag ready with bat and ball. For the sake of the TV camera, I ask her to hit a few balls in the air - cricket 'keepy-ups' - as we film. Standing in the drizzle, she does more than a hundred while chatting about her grandson. The rain gets heavier; I have to ask her to stop. She is irrepressible.

"At the club I play with down south, the Redoubtables, I usually say, 'I don't expect to get a bat' because the youngsters will be OK. But once there's a collapse it's, 'Put your pads on Enid!' And I open the bowling - because a lot of them still play against my reputation."

It is a reputation that deserves recognition. Bakewell knows her generation laid the foundation for today's women's cricketers. And some of the glory that Edwards now enjoys can, perhaps, finally be reflected back in return.