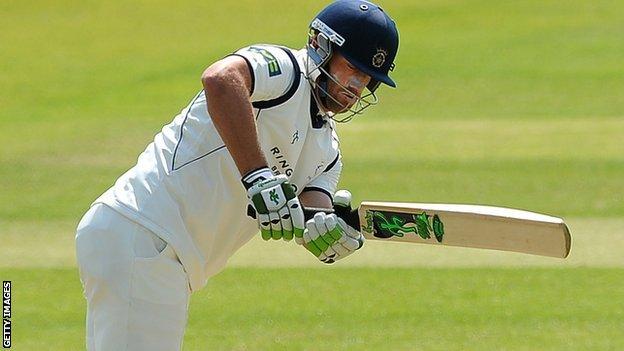 Hampshire's Sean Ervine made 93 to help his side recover from a sticky position in their badly weather-affected match against Worcestershire at Southampton.

Resuming on their rain-ruined first-day total of 37-3, after a totally washed-out day two, Hampshire were in trouble when Jack Shantry took three wickets to reduce the home side to 105-6.

Visiting skipper Daryl Mitchell (44 no) then saw it through to reach 103-1.

New England discovery Moeen Ali was also still there handily placed at the close on 27 not out ahead of a final day which looks a strong favourite to end in a draw.

Earlier, Hampshire skipper Jimmy Adams, resuming on 32, also made a half-century before proving the first of Shantry's four victims for 67.

In their first Championship match since the winter departure of main strike bowler Alan Richardson, Charlie Morris and Chris Russell also claimed two wickets each, while Shantry took the the main bowling honours for the visitors with 4-68.

"Too much time has been lost in the first two days for there to be any realistic chance of a result.

"Nevertheless Hampshire recovered well from 28-3 at one stage on Sunday to 263 all out.

"Jack Shantry caused some panic in the Hampshire dressing room with a spell of 3-13 that reduced the home side from 92-3 to 105-6.

"Sean Ervine was the last man out for 93 - his highest Championship score for two seasons."