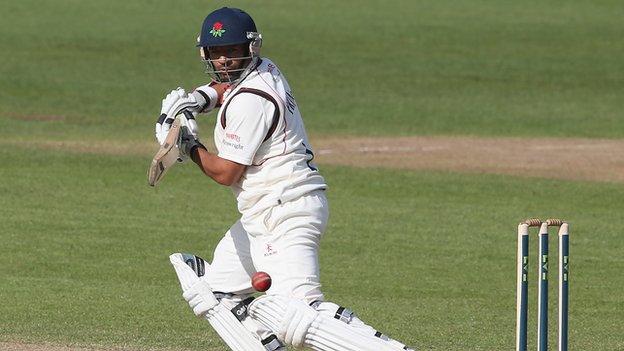 Resuming on 7-1, chasing an unlikely 349 to win a memorable contest, it looked grim for the visitors when they slumped to 112-6 just after lunch.

But Harry Gurney came back to end it, Lancashire being bowled out for 303.

That added up to a successful debut for Ball, who also took two wickets in the first innings.

Having gone from county champions in 2011 to being relegated a year later, this was Lancashire's first game back in the top flight after last summer's stroll to the Division Two title.

After losing Luis Reece the night before, bowled by Gurney, they were unfancied at the start of the final day, only to respond well by making a decent start when captain Paul Horton and nightwatchman Simon Kerrigan put on 70 for the second wicket.

But, once Ball had managed to get Horton caught behind, another three wickets fell in quick succession.

Instead, Prince and Smith - who had a good match, making an unbeaten 42 in the first innings, as well as taking five wickets - dug in until tea, at which point Lancashire were 218-6 needing another 131 to win.

Having got within 90 runs of an improbable victory, Fletcher then removed Smith, and Wayne White and Kabir Ali both went cheaply.

But, although victory chances had by then ebbed away, a 25-run last-wicket stand between Prince and the redoubtable Jimmy Anderson almost saw the visitors to a draw.

"We realised as a team that the pitch was getting better and better. With the amount of overs lost in the match, it was only a day-three pitch really.

"We thought we had a real good chance of getting that score. We knew that we needed a good start and Paul Horton and Simon Kerrigan both played very well.

"Tom Smith was sticking it well. We know what he's capable of as a player.

"And it was nice for me to have got a score in the first game of the season. It's April and it's not easy to bat."

"Notts have usually been particularly strong during the opening weeks of the season but they were made to work hard on the last day in this one, particularly by Ashwell Prince and Tom Smith.

"Chris Read was the unsung hero for the home side. Most of his bowling changes produced results and his careful handling of Luke Fletcher and Harry Gurney meant that both were fresh to make the second new ball count so effectively.

"Every credit to both teams for a thrilling four days. Notts have now got the springboard for a successful campaign, all done with several big names still to come into the side."