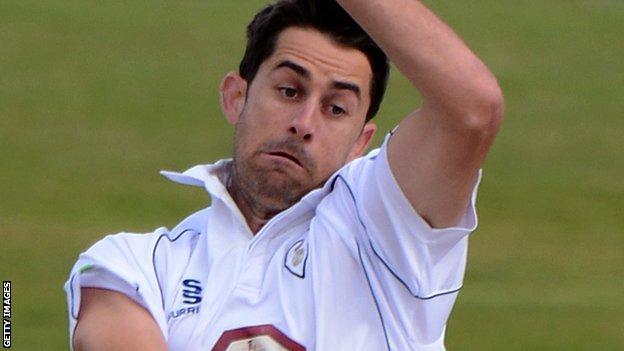 Tim Groenewald took the first hat-trick of the new county season as Derbyshire started their campaign in style by skittling Alastair Cook's Essex for 94.

England captain Cook (35) was in fine form before he was caught legside as Groenewald (5-44) began his charge.

The seamer then had Ravi Bopara caught, before bowling Greg Smith and pinning Ben Foakes lbw in three balls.

The visiting skipper will be pleased with his side's performance, having urged them to post victory in memory of Keith Poynton.

The father of Derbyshire wicketkeeper Tom Poynton died in a car crash just over a week ago, which led to Derbyshire's scheduled opening game of the season at Leicestershire being postponed.

"Essex kept themselves in contention after a disastrous batting performance that was reminiscent of several last season.

"The collapse began when Alastair Cook was caught behind attempting to leg glance Tim Groenewald. Cook had looked in good touch with a composed 35 that included two trademark drives. In contrast, Ravi Bopara struggled to 3 off 15 balls before becoming the first victim of Groenewald's hat-trick.

"Derbyshire threatened a big lead as Madsen and Chanderpaul added 56, but Essex, led by David Masters, kept the visitors in check. Their chances depend much on removing Chanderpaul quickly in the morning."