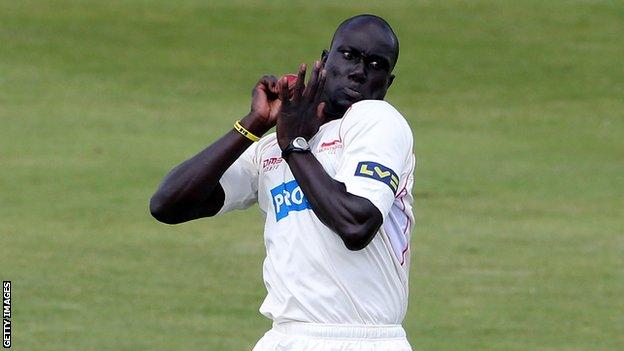 Robbie Joseph took three wickets on his Kent return as his side fought back against Worcestershire at New Road.

England Test hopeful Moeen Ali made 41 off just 37 balls as Darren Stevens, Doug Bollinger and Mitchell Claydon chipped in with two wickets each.

Kervezee had put on 92 with Mitchell when Joseph enticed him to loop the ball into the hands of James Tredwell at mid-wicket.

Jospeh, who rejoined Kent last week having not played county cricket since 2012, then followed up shortly after by having the Worcestershire captain caught behind.

Bollinger was rewarded with the tidy figures of 2-38 in 16 overs on his first return to New Road since finishing his one previous in English county cricket with Worcestershire in August 2007.

Jack Shantry and spinner Shaaiq Choudhry picked up a wicket apiece late on as the visitors ended the day 185 runs behind.

"An interesting first day, which Kent just about edged, although Worcestershire will take some momentum, having removed both openers late on.

"Moeen Ali looked a class act, but will be disappointed with his dismissal as will Alexi Kervezee, who made his first 50 in first class cricket since September 2012, while captain Daryl Mitchell was a model of concentration, as his good form continues.

"To have had cricket at their headquarters, just seven weeks after the ground was severely flooded, is immense credit to the Worcestershire staff, who once again proved what a resilient bunch they are."

"Kent look to have their noses ahead after bowling out Worcestershire on a difficult surface for bowlers and fielders alike.

"It's a minor miracle to have a game here at all just a few weeks after New Road was under water and the groundstaff have produced a flat wicket that rewards hard graft.

"On that basis man of the day was Kent's Robbie Joseph, who bowled with pace and accuracy to take three important wickets mid-innings. Not bad from a bowler who only re-signed for the county a week before the season started, having spent a year out of the first-class game."