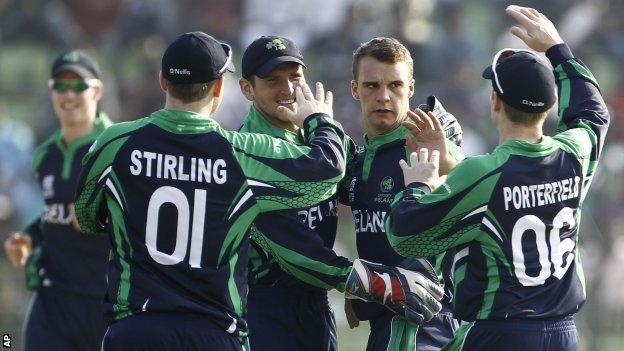 A play-off system that will give Ireland and Scotland the chance to play Test cricket has been approved by the International Cricket Council.

The world governing body said the ICC Test Challenge will take place every four years from 2018.

The winners of the ICC Intercontinental Cup - featuring the top non-Test sides - will play four five-day matches against the lowest-ranked Test team.

Ireland won the Cup in 2013, beating Afghanistan in the final.

"In doing so, it gives even greater context to the ICC Intercontinental Cup, which will now be a pathway to Test cricket."

Under the Test Challenge plan, approved at the ICC board meeting in Dubai, the team ranked 10th on 31 December 2017 - or at the conclusion of any Test series in progress at that time - will compete in the play-off.

They will play a series of five-day matches - two at home and two away - against the winners of the next Intercontinental Cup, which is scheduled to be completed in 2017.

Irish internationals Ed Joyce,Eoin Morgan and Boyd Rankin established themselves in county cricket and elected to play for England, although Joyce resumed playing for his birth country in 2011.

"The ultimate goal of Irish Cricket is to not only stop players moving on and playing for England, but [to get] the county lads that are playing in England back home and on full-time contracts playing domestic cricket there," Porterfield told BBC Radio 5 live.

"It's a great opportunity, the pathway's there but we've just got to go out and do the business on the pitch now."

Ireland have won four of the five tournaments held since 2004, with Afghanistan winning in 2010.

The boards of India, England and Australia gained more control of international cricket under changes to the structure of the ICC agreed in February.