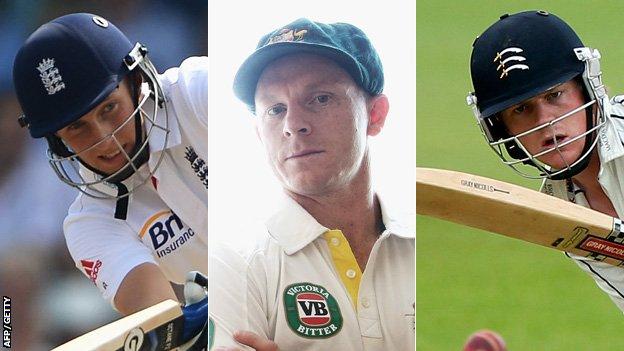 Joe Root should not open the batting for England, according to Australia batsman Chris Rogers.

Rogers, 36, tipped Middlesex team-mate and opening partner Sam Robson as a better choice after his impressive winter with the England Lions.

"I don't particularly think Joe Root's an opener. He plays spin well and he's better suited to the middle order."

Yorkshire's Root, 23, was dropped from the England Test side after struggling during the winter's 5-0 Ashes whitewash. Since scoring 180 in the second Ashes Test at Lord's last July, he averages only 25.

Robson, 24, scored five centuries for the England Performance Programme and the Lions - England's second string side - on their winter tour of Australia and Sri Lanka.

Finn, 25, did not play a Test in Australia and was sent home early during the limited-overs series after coach Ashley Giles deemed him "unselectable".

Rogers said: "He's so young. There's so much time and he's just gone through a pretty tough period. It might be better for him just to settle in, play cricket and get some confidence and belief back."