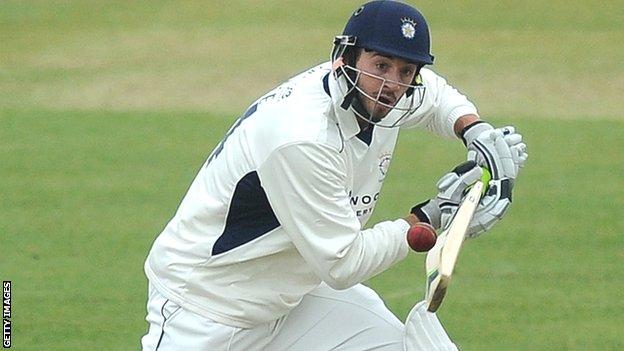 James Vince scored a century as Hampshire opened up a 113-run lead over Gloucestershire at the County Ground.

Gloucestershire began day two on 292-5 and Ken Abbott took 5-67 as the hosts lost their last five wickets for eight runs to be dismissed for 304.

Vince led the way for Hampshire in reply with 24 boundaries in his 144 before falling to Will Gidman (4-66), while Matt Taylor took 4-75.

Adam Wheater is unbeaten on 81 as Hampshire closed on 417-9.

"Gloucestershire began the day in a strong position, but that strength disappeared within the first 25 minutes as Abbott and Tomlinson gave a lesson in how to decimate a tail.

"That capitulation set the tone for a disappointing day for the home side.

"They bowled without consistency and yielding 59 fours and three sixes tells its own story, well though Hampshire batted with Vince and Wheater particularly catching the eye.

"Gloucestershire's poor display in the field has given the home side a difficult task to get anything out of the match after a positive first day."