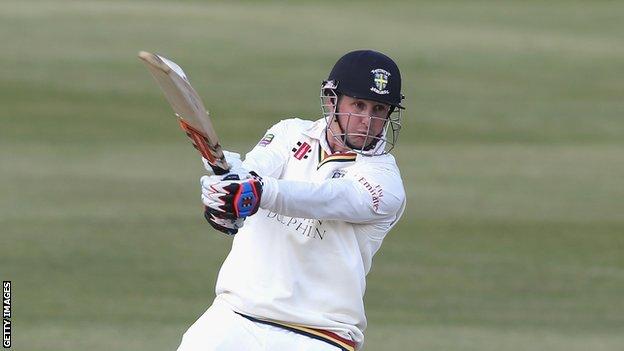 Northants fought back after 91 from Phil Mustard saw Durham post a daunting total on day two at Northampton.

Resuming on 265-5, Mustard could only add 28 to his overnight score as Breese passed 50 for the first time since his unbeaten 121 against Kent in 2008.

Jamie Harrison (65) made his best-ever score with Durham all out for 452.

Northants' reply got off to a good start through Stephen Peters (51), and Kyle Coetzer's 53 helped them towards 200-3 at the close.

Champions Durham struggled early on with the ball, with England hopeful Graham Onions toiling before picking up the key wicket of Peters after Scott Borthwick took a fantastic catch under his chin.

Matthew Spriegel (20 not out) and Robert Newton (24 not out) guided the home side through to stumps, still requiring another 102 runs to avoid the follow-on.

A poor over-rate from Durham saw the match stretched to 18:40 BST, with three overs needing to be made up in the remaining two days, as Division One new boys Northants held their own.

"There have been seven half-centuries in this game so far, but nobody has gone on to make three figures.

"Durham's Phil Mustard came the closest but gloved a Steven Crook ball to the keeper when he was on 91.

"The 62 Gareth Breese scored was his highest first-class total since making 121 not out at Kent in the closing match of the championship-winning season of 2008. And the 65 blasted by Jamie Harrison late on was a career-best as he helped Durham to 452.

"He also took two of three wickets to fall as Northants closed the day on 200-3."