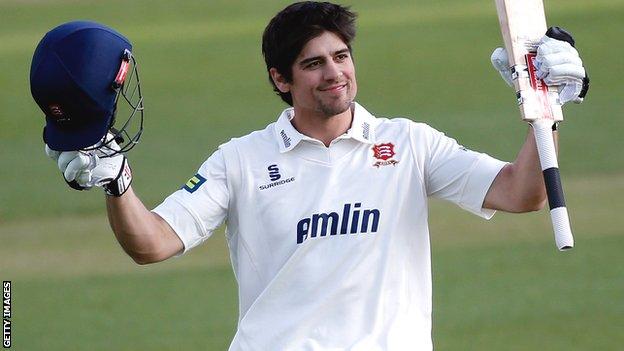 Cook (139 not out) scored his first ton since making 154 for England against Australia A last November.

Derbyshire had earlier lost their last five wickets for 13 runs to be dismissed for 154 in their first innings as David Masters took 6-46.

Shivnarine Chanderpaul finished unbeaten on 75, one of only three Derbyshire players to reach double figures.

"This was a terrific day for Essex, despite a good Derbyshire fightback with the second new ball.

"Masters and Napier had earlier ripped out the last five Derbyshire wickets in six overs.

"Chanderpaul was left on 75 not out and looked every inch a man with more than 23,000 first-class runs to his name.

"Essex soon knocked off the arrears with Alastair Cook making a peerless unbeaten 139, sharing century partnerships with Westley and Bopara.

"Derbyshire fought back well with three wickets either side of the second new ball, but Essex have the upper hand."