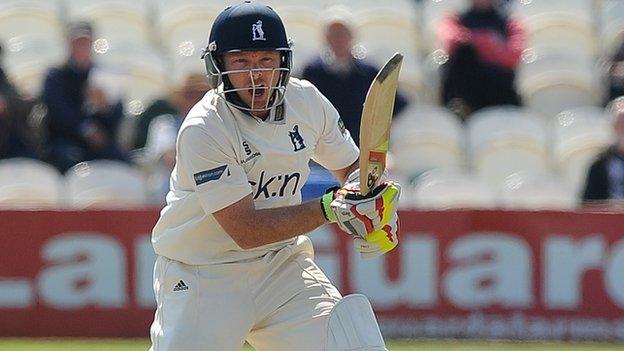 Ian Bell struck an unbeaten century as Warwickshire fought back against Sussex following a rather forgettable first day of the new season at Edgbaston.

Standing in as captain for the injured Jim Troughton, Bell led from the front with 144 not out as the Bears, bowled out for 87 on the first morning, enjoyed a happier second day on 387-7.

Warwickshire still looked in trouble in 147-5, just five runs ahead.

Bell chimes for club and country

But Rikki Clarke (79) and Jeetan Patel (45no) offered strong support to Bell.

With Bell taking root to play a real captain's innings, Clarke dominated a sixth-wicket stand of 122.

Patel then weighed in with eight boundaries late in the day in an unbroken partnership of 69 with Bell, to earn the home side a 245-run lead going into day three.

Earlier, the Bears' other England batsman Jonathan Trott, Warwickshire's first-innings top scorer with 37, contributed 26 as he starts to finds his touch again following his winter trials and tribulations.

Chris Jordan was again Sussex's main man, following his 3-15 on the first day by taking 3-98.

Bell's century was the 46th of his first-class career, his first for the Bears in almost two years, since hitting 120 against Durham in May 2012 - one of his four Championship appearances in the Bears' title-winning season.

"A game that might have finished in two days could well last into four, as Warwickshire staged a magnificent recovery.

"Ian Bell will resume in the morning on 144, an innings full of beautifully executed shots, although Sussex didn't help their own cause with Ed Joyce dropping a very difficult chance when Bell had made just 23.

"Rikki Clarke showed great courage in batting with a damaged finger, and the middle lower order typified that fighting spirit as the lead stretched to 245 at the close.

"Sussex are still slight favourites, but if Warwickshire extend the lead to around 300 in the morning the spin of Jeetan Patel may become an important factor in the outcome of the match.

"Commenting on the continued speculation around Mark Robinson, Sussex skipper Joyce said 'he's a good man manager, and the best coach I have played under in County Cricket'.

"Joyce went on to say that Robinson would bring a lot to any England role, and that part of him doesn't want him to get the job so he could remain at Sussex."