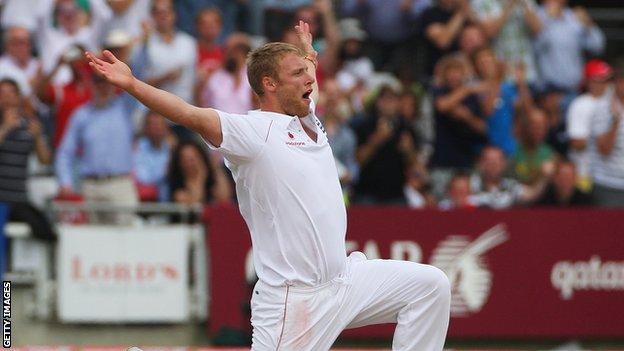 The 36-year-old, who retired in 2010, played for the Northern League side as a junior before joining Lancashire.

Flintoff made contact with the Fylde club through his grandfather.

"We're all very excited about the prospect of him coming back to the club where he spent a few years when he was a teenager," said chairman John Cotton.

Andrew Flintoff had a short spell as a professional boxer after retiring from cricket.

He defeated Richard Dawson on points, in what proved to be his only contest.

Speaking to BBC Radio Manchester, he continued: "His grandfather comes into the cricket club each morning.

"He said Andrew had been invited to play in a charity game at Lord's in July, and he may wish to keep his hand in by playing some Twenty20 games for St Annes and asked for a registration form.

"Twenty20 gets well supported anyway and we'd expect to get some quite large crowds. The games are played in the evening. Hopefully he'll be able to come and play, and excite some of the local people."

All-rounder Flintoff, who played 79 Tests and 141 one-day internationals for England, was part of the Ashes series victories against Australia in 2005 and 2009.

Since retiring in September 2010 because of a persistent knee injury, he has forged a successful media career and also had a brief stint as a professional boxer, winning his only fight against American Richard Dawson in 2012.