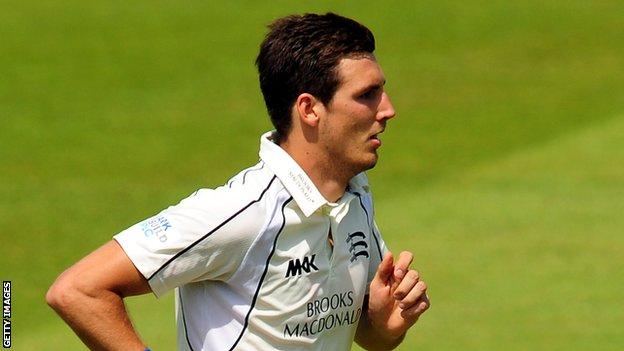 Steven Finn continued his push for an England Test recall by helping Middlesex take control of their game against Nottinghamshire at Lord's.

However, with a lead of only 71, and Middlesex's batsmen in such fine form - Eoin Morgan having made 86 on day two - the hosts go into the final day as favourites to take victory.

England captain Alastair Cook has admitted that places are up for grabs in the national side after their recent slump, and Finn and Robson have surely done their claims no harm, with the latter hoping to join Cook at the top of the order.

The Australia-born opener's innings, which included 22 fours, ended when he edged to slip off Luke Fletcher (2-57), before the hosts declared when Finn fell to Carter (3-74) lbw.

Immediately Finn and Murtagh began to cause problems for the visiting batsmen, with former Australia international Phil Jaques (15) once again struggling and James Taylor falling for 33 to leave Notts 120-5, a lead of just seven for half of their wickets.

Captain Read and Wessels, though, did steady the cause, but will need to dig in on the final day to give their side hope of holding out.

"Middlesex have their noses in front at the close of the third day - but only just.

"John Simpson's century put the finishing touch to a fine first innings from the hosts, which was built around Sam Robson's masterclass.

"The opener must be being given serious consideration for England's first Test against Sri Lanka after a composed and patient innings which displayed all his qualities with some wonderful, controlled shots to all parts.

"Chris Read and Riki Wessels' partnership has given Nottinghamshire the chance of defending a total on the final day but the hosts will hope the new day brings early wickets and the continuation of the dominance of the ball from the early stages of this innings."

"The application shown by Chris Read and Riki Wessels in the last hour will give Nottinghamshire supporters hope that their side can muster a stern rearguard on the final day.

"Very much up against it after five lbw's - all of which looked out - they have been second best since their first innings ended.

"They will need runs from the lower order and an early breakthrough or four on the final day, otherwise the momentum gained from last week's success will take a severe dent."