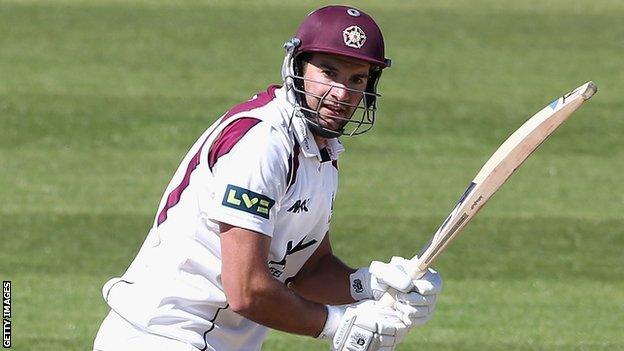 Matthew Spriegel fell three short of his ton as Northants battled to stay on par with Division One champions Durham.

Resuming on 200-3, Spriegel became the eighth player in the match to pass 50 but was caught behind attempting to cut Usman Arshad to the cover boundary.

James Middlebrook took four early wickets to leave the champions 178-5 at the end of play, leading by 252.

It was another disappointing day for Graham Onions, who continues to try and push his cause for England, as he failed to add to the single scalp he claimed on day two.

However, Yorkshire-born Middlebrook managed to get far more out of the pitch as he had both Keaton Jennings (21) and Scott Borthwick (47) caught behind, before trapping Phil Mustard (12) lbw.

Michael Richardson notched up his second half-century of the match to steady the ship, reaching the close unbeaten on 53, but captain Paul Collingwood became Middlebrook's final victim of the day, falling for a quick-fire 31.

Durham remain in the driving seat and will be hoping to make quick runs in the morning session as they chase a first victory in defence of their title.

"Not even a tea-time powercut could stop the flow of runs on day three, even though we saw 12 wickets fall in the course of the day.

"But Northants scrapped away after losing four wickets in a morning-session wobble and will have to do so again with the bat on the final day for two more sessions.

"That's in spite of Matt Spriegel's highest score for Northants - and only his second above 20 - which ended heartbreakingly on 97 when he chased a wide long hop from Usman Arshad.

"Four wickets from James Middlebrook might suggest the pitch is turning, but on a surface still good for batting, you'd expect a draw tomorrow if the Northants batsmen do their jobs."

"This game looks set for an interesting finish and Durham may not need to worry about a declaration on the final day.

"Michael Richardson has been the backbone of the innings, with his second half-century of the game and the ninth of the encounter.

"The spin bowling of James Middlebrook has proved the most potent for Northants so far in this innings, as he took 4-39 in removing Paul Collingwood for 31 with two overs to go."