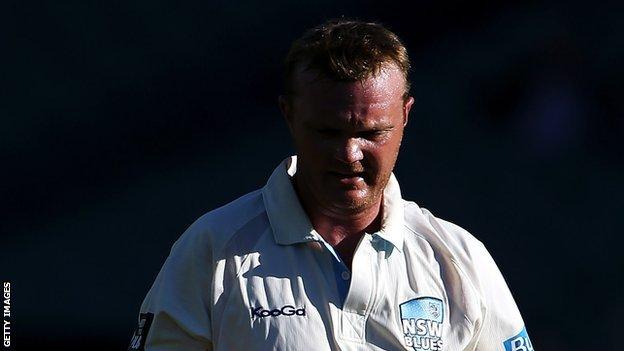 Doug Bollinger took a five-for on debut but Kent look set to fall to defeat against his former club Worcestershire.

Resuming on 41-0, Bollinger dismantled the hosts' top order, trapping Moeen Ali for a golden duck having had Daryl Mitchell caught behind the ball before.

Ben Cox's career-best 89 helped the home side to 270 all out before Gareth Andrew trapped Kent's Sam Northeast lbw with the third ball of the innings.

Making his first appearance at New Road since his season with Worcestershire in 2007, Australian Test paceman Bolllinger claimed match figures of 7-81.

"Ben Cox's innings changed the whole feel of the day, with Kent, and Doug Bollinger on his New Road return, taking the morning session.

"But Cox and Ross Whiteley were positive after lunch, seeing off the spin of James Tredwell and, with good support from Jack Shantry, Cox took Worcestershire beyond the 250 lead they would have hoped for.

"With the bounce getting lower and lower, Andrew took full advantage, and Worcestershire will fancy their chances but will know there's a lot of cricket left in this game."