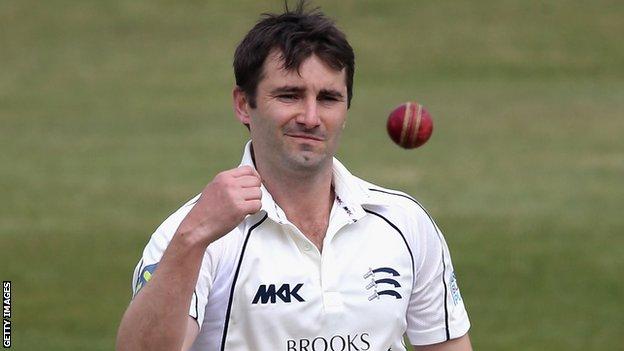 Tim Murtagh's five-for set Middlesex on their way to a 10-wicket Division One victory over Nottinghamshire at Lord's.

Murtagh (5-61) took the key wickets of Chris Read (44) and Riki Wessels (34), who had built a dangerous-looking partnership, early on day four.

He and fellow paceman Steven Finn (4-82) restricted Notts to just 40 final-day runs, as they were all out for 224, leaving Middlesex needing 112 to win.

Australia international Rogers' knock, which included 13 fours, was his first sizeable score of the summer, while England Test hopeful Robson again impressed with the bat, following his first innings total of 163.

But the victory could have been made much more difficult had Murtagh not broken apart Read and Wessels' burgeoning partnership after just five runs were made on the final day.

And when Steven Finn, who ended with match figures of 173-9, took the final wicket of Luke Fletcher, it left Rogers and Robson with the easy task of completing the win.

"It showed a lot of character [to bounce back from the defeat at Hove], we had a very poor performance against Sussex but you don't become a bad side overnight and we knew we had to stand up and, individually, people had to stand up and that was one of the great signs of this game.

"When we were 19-2 in our first innings it could have easily gone badly and for Sam Robson and Eoin Morgan to put on 200 - that's almost season-changing stuff.

"So all credit to them and to the bowlers - particularly that second innings, that was actually a pretty flat wicket and to bowl them out for 200 was a magnificent effort."

"It is reality check time for Notts after being brought down to earth with a bump at Lord's.

"They played well enough to beat Lancashire last week but failed to match Middlesex in all the key areas after appearing well set on the opening day.

"The home side contained batsmen who registered the three highest scores in the match and their bowlers produced the four best analyses, so there can be no complaints at this heavy loss.

"It was not the debut Peter Siddle was looking for either, although he admitted he was a bit 'ring-rusty' but the Australian and his new team-mates have now been reminded how tough this division is."