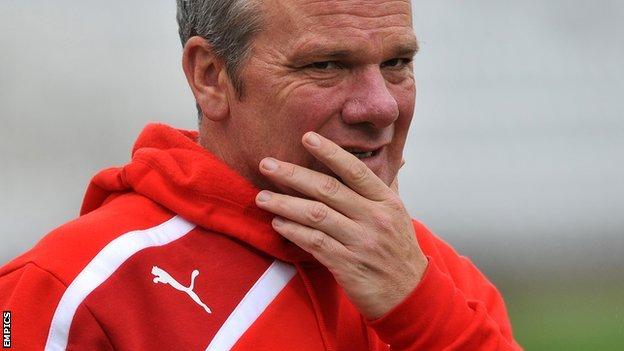 Nottinghamshire's Mick Newell has said he was interviewed for the vacant England head coach role on Wednesday.

Newell, 49, is understood to be one on a list of candidates including Lancashire coach Peter Moores and Sussex cricket manager Mark Robinson.

England have been without a head coach since Andy Flower quit in January.

"I was told I'd got an interview and I got that interview this morning, so we'll see what happens," Notts director of cricket Newell said.

Flower quit following this winter's disastrous 5-0 Ashes defeat, and Newell had previously told the BBC's Test Match Special he would be applying for the role, for which current England ODI and T20 head coach, Ashley Giles, is seen as the favourite.

Moores, who was axed from England's top job in 2009, has also publically put himself forward as a candidate.

Newell feels the time was right to push his claims, having led Nottinghamshire for more than a decade, during which time he has won two County Championship titles.

His team also won the YB40 competition last year, the club's first one-day trophy since 1991, while he has some international coaching experience with England Lions.

"In three or four years time I will be in my early to mid-50s and I think there will be a new generation of coaches coming through," Newell added to BBC Radio Nottingham.

"From my perspective I feel this is my opportunity and that's why I put my application in."

The England and Wales Cricket Board's new appointment may look to revamp the squad following the retirement of spinner Graeme Swann and controversial sacking of batsman Kevin Pietersen.