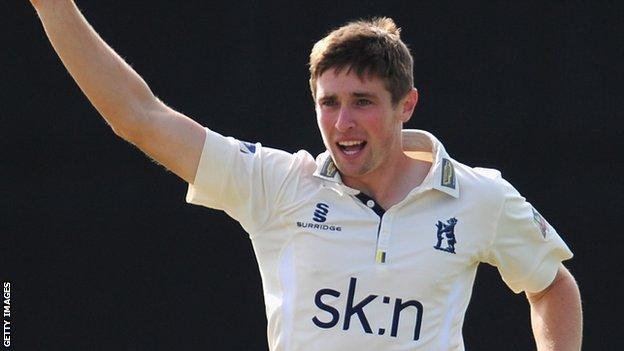 Opener Paul Horton hit 83 as he shared fifty partnerships with Andrea Agathangelou (48) and Luke Procter (37), while England's Jos Buttler made 28 in his first match for the county.

Varun Chopra and William Porterfield saw Warwickshire to 63-0 at the close.

After returning captain, Glen Chapple, won the toss and elected to bat, Lancashire lost Luis Reece (10) early when he edged behind off the bowling of Barker to become the first of Tim Ambrose's six victims.

Agathangelou and Horton put on 68, before Woakes dismissed the former, and Ashwell Prince for nought, either side of lunch to leave the hosts 85-3.

Proctor and Horton then added 83 but Oliver Hannon-Dalby removed Procter and Barker returned to trap Horton in front.

Tom Smith and Wayne White fell in quick succession before 40-year-old Chapple and Buttler launched a mini counter-attack with the captain hitting a flurry of fours.

After Buttler edged Woakes behind, the Warwickshire seamer then picked up the wickets of Chapple for 29 and Jimmy Anderson for a duck in his next over to restrict Lancashire to just one batting bonus point.

Chopra (29 not out) and Porterfield (30 not out) then capped a fine day for the visitors by batting through 19 overs in the last hour and a half of play.

"Lancashire will perhaps feel this was a day that got away from them, they were unable to turn a couple of good partnerships into big ones and fell short of posting a first innings total which at one stage looked likely to be in excess of 350.

"A fine innings from Paul Horton, the pick of the Lancashire batting card, the opener constructed his innings superbly before falling to an lbw decision which looked a little high.

"The wicket of Andrea Agathangelou caught behind driving off Chris Woakes in the final over before lunch was quickly followed by Ashwell Prince.

"Horton and Luke Procter started to rebuild before a late flurry of wickets after tea resulted in a good day for the visitors."

"Warwickshire's disciplined bowling and batting gave them control of the match in the third session after a tug-of-war contest in the first two.

"Their bowlers were persistent despite the stiff crosswind. Chris Woakes and Keith Barker timed their interventions well.

"Crucially, Woakes tempted Andrea Agathangelou into a loose drive in the last over before lunch, and was doubly rewarded when Ashwell Prince edged his second ball after the break.

"Varun Chopra and William Porterfield were positive against the new ball in the last hour to secure Warwickshire's first-day advantage."