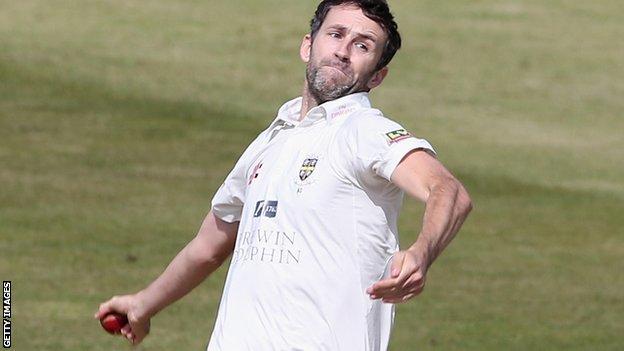 Graham Onions and Chris Rushworth claimed four wickets each as champions Durham bowled out Somerset for just 185 on day two of their Championship game.

They only needed 44.1 overs to dismiss Somerset, who had begun on 7-0, and secured a first-innings lead of 123.

Onions enhanced his chances of an England Test recall with 4-65, while new ball partner Rushworth took 4-52.

Having bowled out the home side for 308 on the opening day, Somerset must have at least been looking for something close to first-innings parity when they resumed.

But the accuracy of Onions and Rushworth proved too much for them, with the former soon bowling openers Marcus Trescothick and Chris Jones.

Six other batsmen fell leg-before-wicket, including Nick Compton, who batted at number eight because of a sore neck, which was a testament to the control of the Durham attack, and meant that Scott Borthwick, England's senior spinner in the final Ashes Test of the winter, was not given a single over.

Borthwick did not succeed with the bat either, caught one-handed off Trego by Jones at short mid-wicket for eight, as Durham struggled to 31-2.

Keaton Jennings (41) and Mark Richardson (32) added 57 before falling in quick succession and Trego removed Phil Mustard and Gareth Breese with successive deliveries as the north-east county lost wickets regularly to leave the match potentially still in the balance, although Paul Collingwood remained on 23 not out.

"A sloppy final session from Durham gave Somerset some hope of a first win at Chester-le-Street since 1997.

"After tea Durham lost five wickets for 36, surrendering the advantage they had gained earlier in the day.

"Although they have a lead of 275, Marcus Trescothick knows quick wickets in the morning will give Somerset the best part of two days to chase down a target.

"Durham may take some comfort, though, from the fact that 17 wickets fell on day two, on a pitch which looked fairly sedate until mid-afternoon."