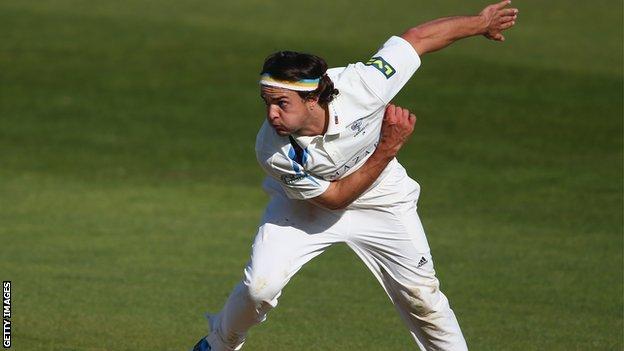 Jack Brooks tore former club Northants apart as Yorkshire skittled them for 94 after earlier declaring on an 459-9.

Paceman Brooks helped himself to 37 not out before taking the new ball, and with Ryan Sidebottom claiming 4-16, Northants were all out in 30 overs.

Bad light and rain meant the visitors are still waiting to hear whether Yorkshire will enforce the follow-on.

Brooks no doubt drew extra motivation from facing Northants, who he left in 2012, for the first time in first-class cricket.

And after Ballance added 57 to his overnight score, the number 11 bludgeoned 30 runs in boundaries, including an impressive hook for six off Maurice Chambers, during his unbroken last-wicket stand of 61 with Steve Patterson (17 not out).

The eight lbw dismissals suffered by Yorkshire in their first innings against Northants is a joint world-record number in a first-class match.

Northants never got a foothold having begun their innings after lunch and Stephen Peters and James Middlebrook fell with the score on 16, and once Sidebottom had Kyle Coetzer caught at slip shortly after, Brooks again took centre-stage.

He had Rob Newton, Andrew Hall, David Willey and Steven Crook all caught to reduce Northants from 39-3 to 65-7, before David Murphy edged Liam Plunkett to the keeper.

Matt Spriegel clung on for an unbeaten 29, but only two other batsmen reached double figures as Sidebottom cleaned up Maurice Chambers' stumps and had Mohammed Azharullah caught at slip next ball to finish the innings and leave himself on a hat-trick.

It left the visitors 365 runs in arrears, but although openers Peters and Middlebrook padded up, but there was no play in the final session because of rain and bad light and Yorkshire have not yet stated their intentions for the match's third innings.

"I won't ever regret having moved up here," Brooks said afterwards. "It's a great club to be part of at the minute.

"I'm enjoying my cricket at the minute, I enjoyed it at Northants, but I enjoy winning - if we can challenge for trophies then that's fantastic."

"The afternoon session proved to be chastening for Northants who lost all 10 wickets between lunch and tea. Only bad light and then rain following the tea interval prevented them following on.

"Jack Brooks was a man inspired against his former county and Ryan Sidebottom was impressive, but one or two batsmen chased wide deliveries when they would not under less pressure.

"But the ball beat the bat at regular intervals during the Yorkshire innings and while the home side survived, Northants subsided when it was their turn. The forecast of rain on day three is the only positive Northants can take."