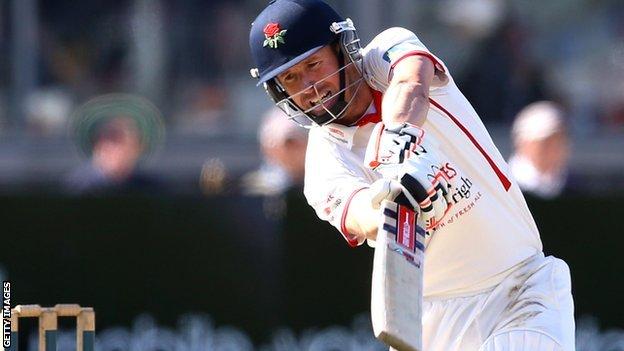 Lancashire's match against Warwickshire looks set to end in a draw after day three was badly hit by rain.

After the weather prevented any action before tea, play started at 16:45 BST.

The visitors only added eight to their overnight lead of 69 before James Anderson took his first wicket of the match, clean bowling Oliver Hannon-Dalby to see them all out for 324.

The weather prospects for Wednesday look better, though, at this stage, it seems unlikely that either side will be able to force a result.

The game is Lancashire coach Peter Moores' final one before taking over as England head coach for the second time.

"It didn't take long for Lancashire to wrap up the Warwickshire innings when the rain finally halted.

"Then it was over to Lancashire's opening pair of Paul Horton and Luis Reece to face a tricky 22-over spell.

"Batting under floodlights against a Warwickshire side looking to make the most of their 77-run lead Horton and Reece batted well and rarely looked troubled.

"A similar start tomorrow should be enough to end any lingering hopes of a Warwickshire win."

"Rain has probably condemned to a draw a match that, played to a natural finish, might have had plenty of life in it.

"Warwickshire will hope they can cause a flutter with early wickets tomorrow, but they found the Lancashire openers in obstinate mood in 22 overs this evening.

"The outside edge was passed occasionally, and Jeetan Patel seemed to find some awkward turn and bounce, but the draw is now the favourite.

"It was heartening for Warwickshire fans to see Chris Wright bowling a long spell, working up some speed, as he looks to make up for time lost to serious injury last year."