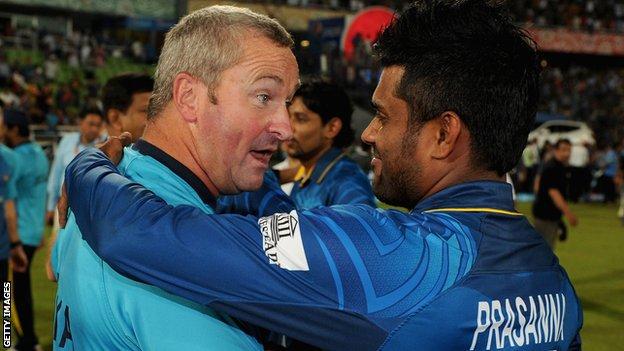 Paul Farbrace has been confirmed as England's new assistant coach after quitting his Sri Lanka role.

The 46-year-old former Kent wicketkeeper will work under Peter Moores, appointed for a second spell in charge of England on Saturday.

"It's fantastic to be given the opportunity to work with your country's national team and an offer that I could not turn down," he said.

Farbrace said he was relishing the chance to work with Moores.

They have been on the same coaching programme and were both wicketkeepers on the county circuit together.

Farbrace, who has previously had spells as coach of the England women's team and Kent, became Sri Lanka assistant coach in 2007, working under Australian Trevor Bayliss.

"This will be a serious blow for Sri Lankan cricket, coming soon after they won the World Twenty20.

"This was not expected at all, it's a very sudden departure. We understand he has had a better offer from the England and Wales Cricket Board.

"Sri Lanka cricket authorities have expressed disappointment and sometimes even anger that Farbrace took the decision without even having any consultation with them."

He was on the team bus that was attacked by terrorists in Pakistan in 2009 and needed two operations to have shrapnel removed from his arm.

Farbrace left his role four months after the attack in Lahore, returning to Kent as director of cricket before before moving to Yorkshire as second XI coach.

He took charge of Sri Lanka in January, leading them to the Asia Cup and then the World T20 in Bangladesh, their first major trophy since the 1996 World Cup after a run of four successive final defeats.

Farbrace has also worked with England's youth teams, coaching current England captain Alastair Cook at both under-15 and under-17 level.

"I'm certainly looking forward to meeting Farby again," said Cook. "He's a good addition because he hasn't really been involved in an England set-up before and he'll have some new ideas.

"As we all know, the captain-coach relationship is very important in cricket and I need to sit down with Mooresy and Farby to get our heads together on exactly what we want to achieve and how we're going to go about it."

ECB chief executive David Collier had thanked Sri Lanka cricket for their cooperation in releasing Farbrace, but selection committee chairman Sanath Jayasuriya said his team had been left in a "helpless situation".

"Unfortunately, we are facing a slightly difficult situation," said Jayasuriya. "Marvan will have to take a greater responsibility."