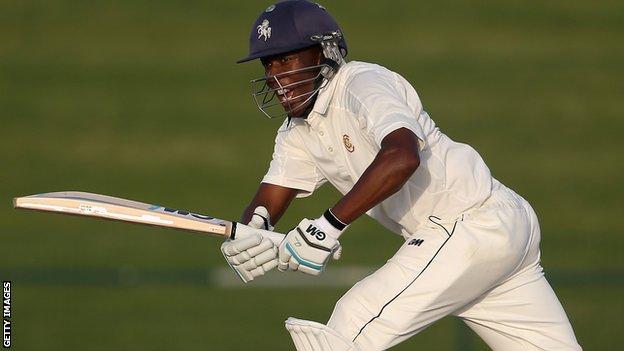 Kent survived a final-day collapse to draw with Leicestershire at Canterbury.

The home side began woefully, slumping to 36-4 with both Sam Northeast and Ben Harmison out for ducks.

But Daniel Bell-Drummond (39) and Darren Stevens (34) - against his old side - held out for the draw with an unbroken 53-run stand.

It was a disappointing result for Leicestershire, still searching for their first away Championship win since beating Worcestershire in June 2010.

And they may rue the decision not to declare earlier, following excellent work by Smith and Robson, who was playing in only his fourth first-class match.

Having failed to win a Championship game in the whole of last season, Leicestershire looked to be on for an unlikely opening-game victory after Northeast was caught and bowled by Charlie Shreck off the first ball of the innings, and Brendan Nash and Harmison fell to Jigar Naik (2-34).

But youngster Bell-Drummond and veteran Stevens batted manfully to see Kent avoid a second successive defeat, having lost to Worcestershire in their season-opener.